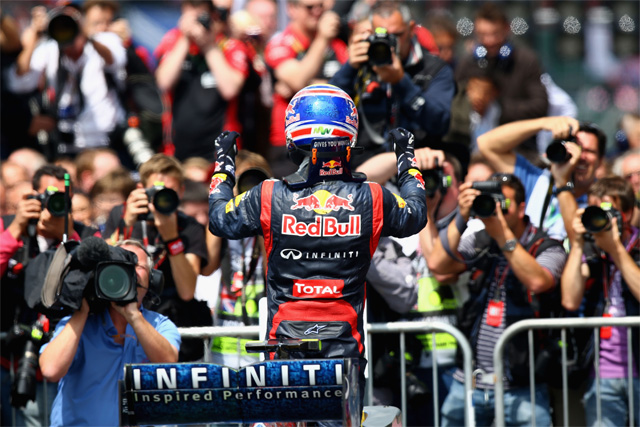 Red Bull now has an enviable record at the Silverstone circuit after today's race. The Milton Keynes based team have now won at the British venue three times in the last four years.

Mark Webber, who lives just a few miles away from Silverstone, was able to capitalise on a front row start and passed long time race leader Fernando Alonso with only a few laps to go. The Australian has now become the second repeat winner after Alonso of 2012 and narrowed the Spaniard's lead in the championship to just thirteen points.

“It's taking a while to sink in this one. I think it was the circumstances of the race – for most of it I was marking off second place. Fernando was not quite out of touch and after the last stop, my engineer Ciaron came on the radio saying that Fernando was not doing much on the option tyres. But I know Fernando is a wily old fox, I thought he was looking after the tyres and just waiting to pull the pin and go a little bit. But when I got within two seconds I thought maybe he's in a little bit of trouble and it was real.”

“It was completely game on when I knew the DRS was available, I made the move stick and our hard work paid off for the win. It was a cracking grand prix today; the spectators got to see a good race and I'm pleased for them.”

Meanwhile, team mate Sebastian Vettel also made progress in the race. He finished third – his first podium since Bahrain.

“It was a tough day today. The start was not so good. I lost a little bit and then got stuck behind Michael, but had a good strategy to come back. We decided to pit early and we came out ahead, so that was a good call. I would be a bit happier if we had won today, but it was a great result for the team, I am happy. We're just down the road, so it's our local race.”

“It's good it didn't rain, I saw some clouds coming and it might have helped my race, but I was very happy for the people in the grandstands. I think they appreciated it staying dry. It's been a tough weekend for them with rain, a lot of traffic and not so much driving from our side due to too much water – but I think we made up for that today,” he said.

“An unbelievable day for the team. Starting the race, our strategy was slightly different to Ferrari with Fernando opting to start with the harder tyre, but we knew we could make our strategy work if we stuck to our plan,” team principle Christian Horner added.

The team's success today was made even sweeter due to the fact that Red Bull was running a special one off livery for the weekend. Hundreds of fans had paid money to Red Bull's Wings for Life charity to have their face on the cars. The initiative has raised over a million euros.

“We also had 25,000 pictures on each car supporting Wings for Life this weekend, which has raised a million Euros for the charity. So, after a tough start to the weekend, the sun finally shone for the fans and the team and it was a fantastic team result.”