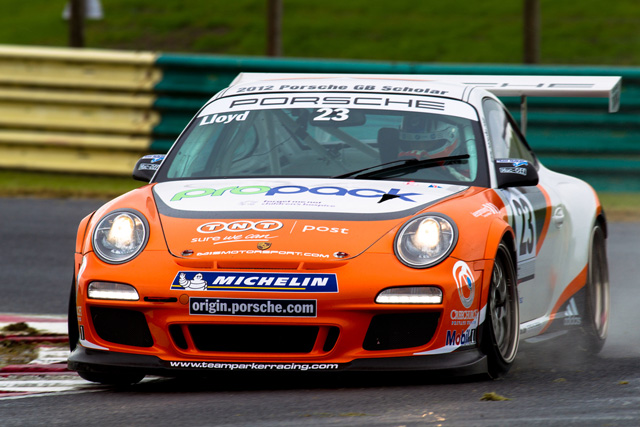 Porsche Carrera Cup GB Scholarship winner Daniel Lloyd is looking to return to the winners podium at Snetterton, as the championship resumes after the summer break.

Lloyd, who sits fifth in the championship, enters the weekend in a buoyant mood after last week’s news that he has extend his deal in Porsche Carrera Cup GB until 2013, and the Yorkshireman is determined to challenge fro his second victory of this campaign.

“It’s easy to forget we’re only halfway through the season, so much has happened during the first half”, said Lloyd. “Absolutely anything can happen in the championship with 10 races still to go and I’ve definitely grown as a driver over the last couple of months. There’s no reason at all we shouldn’t have a strong start to the second half of the year, I really want another win as soon as possible!”

Lloyd has kept himself busy during the seven week break. He represented Porsche GB at the Goodwood Festival of Speed before making his debut supporting the Formula 1 World Championship at Silverstone in the Porsche Mobil 1 Supercup. But now Lloyd turns his focus back to PCCGB, and at the half way mark he is looking to add to his three podiums thus far.

“It’s great we’re back racing, it feels like ages since we were in action at Croft so I can’t wait to be back in the car this weekend”, added Daniel, “I’ve not raced on the 300 Circuit at Snetterton and I’ve only been round there once in the dry during the pre-season – we did test there last week but it was wet! Whatever the weather does, we should be quick and I’m confident of a strong weekend.”

Michael is currently studying Motoring Journalism at the University for the Creative Arts in Farnham, Surrey. You can follow him on Twitter at www.twitter.com/mike_trusler Google+ Profile
Articles

By Ross Wylie
3 Mins read
Ross Wylie’s season is underway in the GT Cup as he defends his title, along with an opportunity to drive for Valluga in the British GT championship and a visit to the Carrera Cup GB.
Porsche Carrera Cup GB