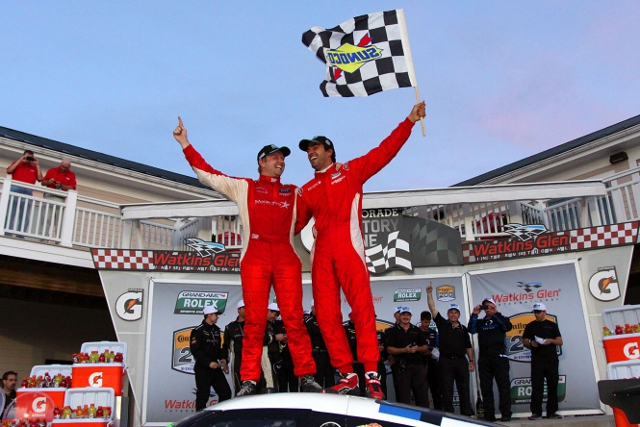 Only days after Enzo Potolicchio walked away from their Rolex Series Daytona Prototype program Starworks Motorsport bounced back to score a 1-2 finish in the Continental Tire 200 at The Glen, injecting Ryan Dalziel into the title race with three rounds remaining.

The team’s two Ford-Rileys mmoved to the front of the field late in the two hour race at Watkins Glen international, Dalziel crossing the line for his first Rolex Series win of the year. Co-driver Lucas Luhr joined the Scot in victory lane.

Dalziel took the lead late on after the final round of stops moved the Daytona Prototype field within fuel mileage of the end of the race. The stops broke up a battle for the lead, Ozz Negri leading the race for Michael Shank Racing with Dalziel and the Action Express Racing Corvette of David Donahue third.

Of the top two it was Peter Baron’s Starworks team who pitted first, Dalziel pitting a lap earlier than Negri, the latter suffering delays in the pits that allowed Dalziel to move into the lead unchallenged as Negri trundled frustrated down towards the pitlane exit. The problem in the pits was not the Shank team’s only problem of the race, the #60 Ford-Riley penalized ten seconds after the pit crew was deemed to have left the wall before the car came to halt for a pitstop just after the race’s first caution, brought out when Joe Foster was dumped hard into the wall at the final corner after contact with Darren Law’s Action Express DP.

The strategy call, to install Negri in the car at the earliest opportunity, dropped him briefly to the rear of the field, but when the remainder of the Daytona Prototype pack pitted under the race’s second caution Negri rose back into the lead, holding the top spot until the final round of stops with 40 minutes left.

After losing the lead Negri found himself at the head of a phenomenal battle for second that involved as many as five cars. Recovering from a harmless, though time consuming spin by co-driver Alex Popow early on, Sebastien Bourdais in the second Starworks car had leapt up into third in the pits, narrowly beating Scott Pruett to pit out.

Several times the aggressive racing between Bourdais and Negri threatened to end in at least one damaged car. Bourdais looked down the inside at the final corner, Negri’s slamming the door only briefly relieving the pressure as the Brazilian locked a wheel under braking for turn one, while Bourdais’ loss of momentum only allowed Max Angelelli and Donahue to hook themselves onto the rear of the battle.

Sadly for the Rolex 24 winners, the plume of smoke that followed Negri downhill into turn one soon turned into a flat tyre, though fortunately the damage reach the critical point under braking for the penultimate corner, that not only gave Negri plenty of tarmac run-off to regain control of the car, but minimized the time lost as he slowly returned to the pits.

Ozz Negri led for Michael Shank after an early strategy call, but lost out late on (Photo Credit: Grand-Am)

With Negri removed from the head of the battle the remaining foursome spread back out again, Bourdais lapping faster than Dalziel, though the leader had been able to build up enough of a lead over the second place squabble that Bourdais pace was of little threat.

Until contact between Donahue and Patrick Lindsey pushed the Horton Autosports Porsche out of the fight for the GT podium and into the Armco approaching turn 10, the damaged Porsche bringing out the third and final caution period of the race with just 15 minutes remaining.

Though the caution bunched up the field, the green flag flying once more with just five minutes remaining, it did little to affect the final result, Dalziel leading Bourdais and Pruett’s Chip Ganassi  Racing car across the line.

After the puncture Negri crossed the line in seventh place, while pole-sitters SunTrust Racing finished fourth. Fellow front row starters Spirit of Daytona Racing were taken out of the race early with a broken axle on the Antonio Garcia and Richard Westbrook driven Corvette DP.

It was also an important day in the points standings in the GT classes as a win for Turner Motorsport Bill Auberlen and Paul Dalla Lana lifted the latter, again, to just six points behind long time points leaders Jeff Segal and Emil Assentato.

Assentato’s race began with a bang – literally – as he lost control of the AIM Autosport Ferrari 458 on approach for turn one, skittling into title rival John Edwards’ Stevenson Camaro, knocking both of race winning contention. Assentato and Segal would finish seventh in class, Edwards and co-driver Robin Liddell only 14th.

Ahead of the accident Boris Said converted pole position into an early race lead for the Whelen Engineering Corvette team, only giving up the lead under the first caution when Andrew Davis and Brumos Racing led by virtue to not pitting, staying out to ensure Davis completed the minimum driving time to receive championship points.

Davis pitted under the second caution of the race, handing the lead back to Said in the Corvette – the veteran only handing over to Eric Curran with the final half hour approaching, Auberlen taking the lead.

Auberlen held the lead on the sprint that remained after the final caution, Curran finishing second with Leh Keen holding off Andy Lally in an all Porsche battle for third, Keen bouncing back in the Brumos car after being caught up in a four car incident at turn one with three GT Mazda.

The Rolex Series continues next weekend at Circuit Gilles Villeneuve in Montreal.