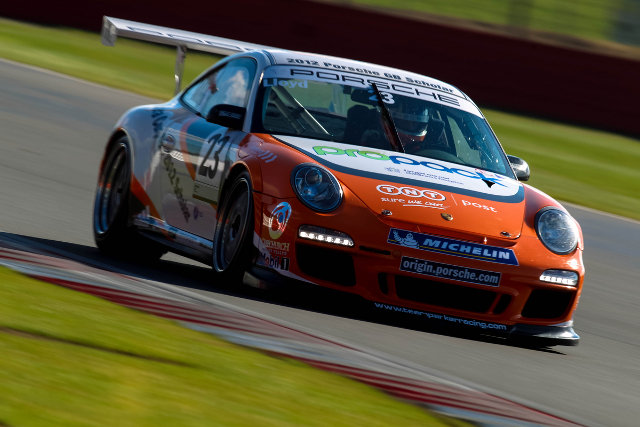 Daniel Lloyd was left searching for answers after an unknown mechanical gremlin hampered his charge during the latest rounds of the Porsche Carrera Cup GB Championship at Silverstone.

The reigning  Porsche Carrera Cup GB Scholar could only secure a best finish of ninth in the penultimate meeting of the season, but still maintains a top six placing in the championship standings heading into the final meetings.

Qualifying didn’t got to plan for the 20 year old, the close nature of the Silverstone circuit meaning he would live up ninth for both races, despite being only 0.4s shy of pole position.

In the weekend’s opening race, the Huddersfield youngster moved his way up into seventh early on, but everything went wrong for Lloyd on lap 18, with his Porsche slowing across the start/finish line as a result of a shattered wheel-nut, eliminating him from the race.

Fired-up in race two, Lloyd got up to eighth on lap eight, but was soon losing time on the straights, meaning he couldn’t keep in touch with the cars ahead. This was then compounded by a five second time penalty after he was deemed to have exceeded track limits, dropping him to ninth.

“It’s really confusing what the problem might be but we definitely struggled to stay in touch on the straights”, explained Daniel, “We thought we’d found the problem after Saturday, everything looked more positive in the first race before the wheel problem as the data was better but in the second race I was losing time to the cars in front in a straight line – fractions are all it takes.

“I’m not sure if there’s something wrong somewhere with the engine or gears, whatever I seemed to do, whatever revs I changed gear at, the others just pulled a gap in a straight line. It’s a bit of a vicious circle then as you begin to over-drive a bit. It’s not been a good weekend but hopefully we’ll be back where we should be at Brands Hatch to end the season on a high.”