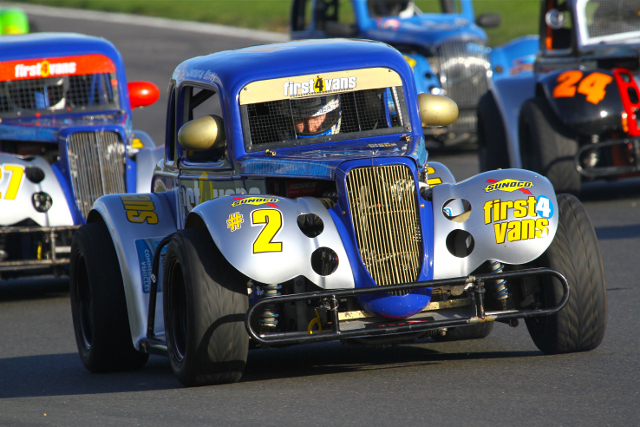 27-year-old Davey entered the final weekend of the season in the lead of the Sunoco Grand-Am 200 Challenge, but needed a solid set of results from the final six races of the season to stay ahead of Production Touring Car champion Gary Duckman.

Two second places and a victory from the three races on the Saturday at the Brands Hatch Indy circuit completed half the job in the Challenge, as well as securing the Legends title for 2012.

Davey’s Sunday started from the fifth row, but after just a single lap of the short circuit the champion was back in the lead. He led the first seven circuits of the nine lap race, with Ben Power and Dean Brace giving chase as the leading trio broke comfortably away from the rest of the field.

With rain setting in Power took the lead in the closing laps, leaving Davey to fight for second with Brace, who himself finished third in the Challenge. With rain setting in Power swept away to collect the win, but successfully defending from Brace for second place Davey collected another 85 for the challenge, enough to push him over the crucial mark to keep Duckman behind him in the final standings.

“It was a tough race as the visibility was so bad,” Davey said. “I started on the fifth row, which was hard, and I just wanted to get to the front pretty sharpish! I got the lead on the first lap but then just took it steady as I had very little grip – the other cars were always going to catch me as my tyres were giving up. I was happy to let Dean pass me and finish in second to secure the points.”

“I’m really looking forward to driving at Daytona, although it hasn’t really sunk in yet! I can imagine the cars will be a lot different to my Legends car in terms of horsepower and handling, but I’m really excited about getting behind the wheel and will be doing everything I can to fully prepare for it and give it my best shot. I’ve raced at a few circuits with banking but they are nothing compared to Daytona – it looks immense and I can’t wait!”

Before taking his race set for the Grand-Am 200, which supports the Rolex 24 at Daytona (January 26-27) Davey will get the chance to test in the US following Ivan Bellarosa who won the chance to race in the Rolex 24 itself with Sunoco after dominating the Speed EuroSeries season.