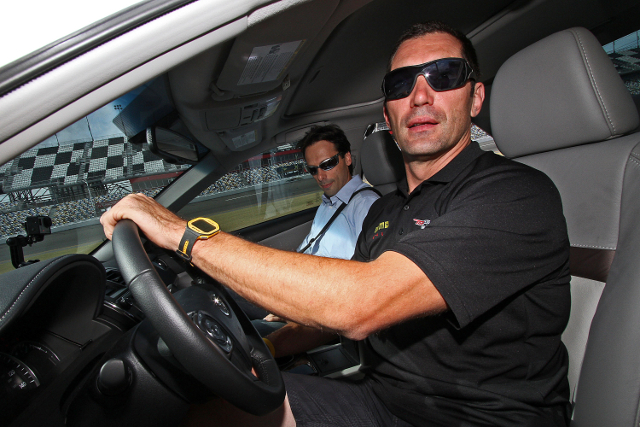 Sunoco Rolex 24 at Daytona Challenge winner Ivan Bellarosa got his first laps around the Daytona International Speedway course – in the passenger seat.

Italian Bellarosa got a tour of the Florida course under the guidance of countryman Max Papis, who will share the driving duties with Bellarosa in the upcoming two day test for the Rolex Series teams at Daytona (November 13-14).

“I think it’s a very impressive circuit,” said 37-year-old Bellarosa on seeing the highbanked oval for the first time. “This is a dream opportunity to race in the Rolex 24. Max is experienced in this race and this circuit. His presence for me is very important.”

“It’s a dream come true for anyone,” Papis said. “I remember when I was in Europe, I always dreamt about having a chance to come over here and drive at Daytona. What Sunoco is doing is something really special and remarkable.”

“This is the place where my dreams started. Having my name on the [Rolex 24] trophy in the is something unique and to be able to share that feeling with a fellow Italian is pretty special. My goal is for him is to bring home a piece of America with him and a piece of history.”

Bellarosa made his Daytona Prototype debut in testing with Action Express Racing at Virginia International Raceway alongside Papis and the pair will again pilot Action Express’ second generation DP Porsche-Riley.

“My job with him is giving him a good baseline for the car and make sure it works good,” Papis, part of the 2002 Rolex 24 winning line-up, explains. “He’s going to be in the car and I’m planning on getting in two or three times during the day and assess his feedback on the car.”

19 Rolex Series cars are expected to take part in the test including Daytona Prototypes from Michael Shank Racing – defending Rolex 24 champions – Wayne Taylor Racing and Team Sahlen, making their first running with the BMW-Riley DP following their move up from the GT class announced mid-season.

2012 GT champions AIM Autosport will be represented by a pair of Ferrari 458 with Porsche, Camaro, Corvette, Dodge and Audi team also present, five-time 24 Hours of Le Mans winner Frank Biela one of the drivers who will pilot the R8 GRAND-AM.