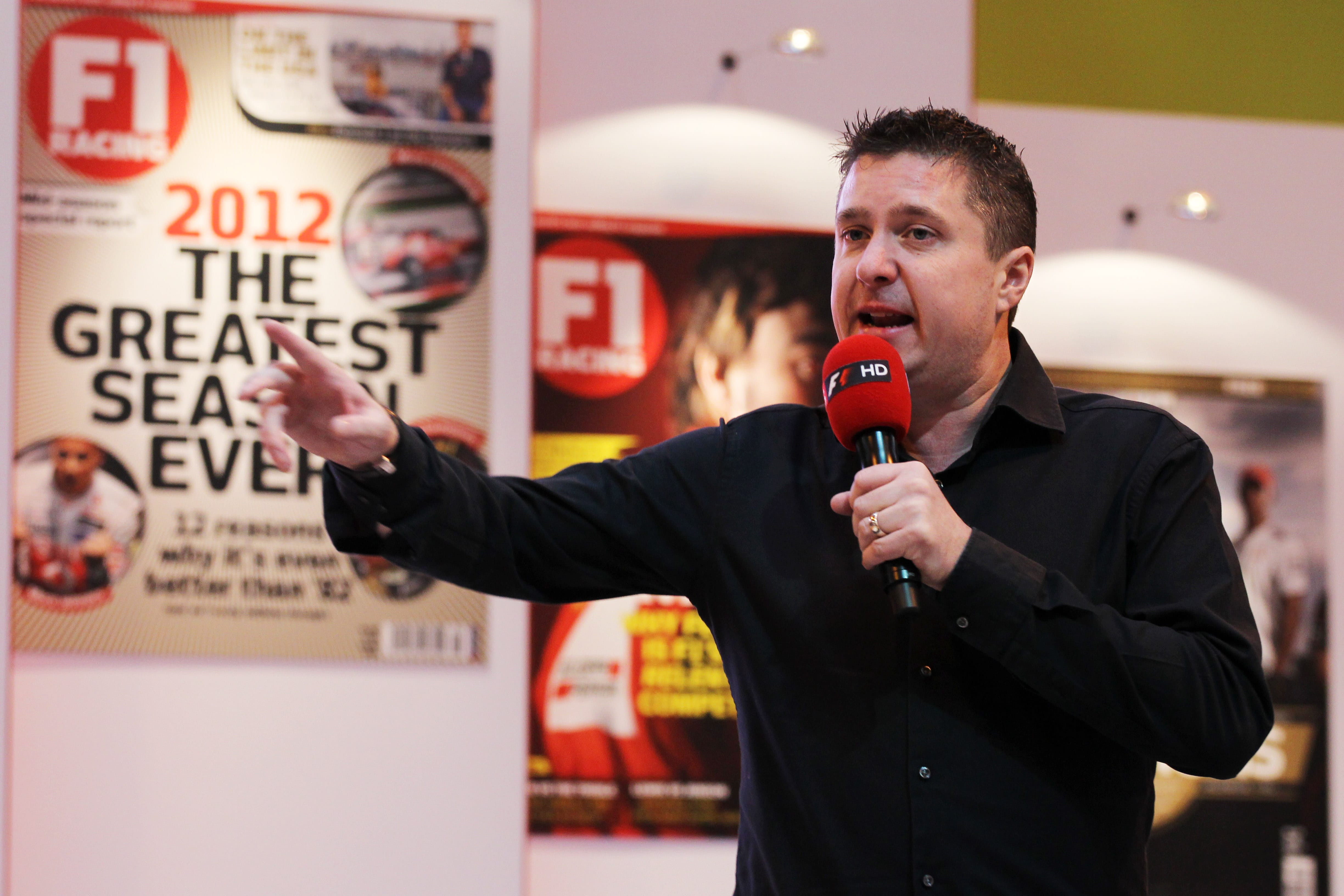 In 2012, Sky Sports F1 HD changed the way we look at coverage for the UK fans of the “fastest sport on four wheels,” providing unique interactivity for everyone to get involved. Lead commentator, David Croft, or “Crofty” as we all know him, is one of the main forces driving this initiative forwards, helping to raise the bar even further for the future coverage of Formula One.

At this year’s Autosport International Show, Crofty was kind enough to answer some questions from TheCheckeredFlag.co.uk about the most dramatic F1 season for years in 2012, as well as his involved role in the scheme of interactivity, his view on it, and the look forward to what 2013 may bring for everyone that supports this iconic motorsport institution.

Being on the front line was a different proposition this season for the Stevenage broadcasting veteran, as he knew that it would all be a very different perspective for him making the jump from the radio to TV, and alongside co-commentator Martin Brundle, it would have been a very difficult task if there was nothing to talk about: “From the very first race, you knew that this was not going to be a dull season. It was like a beautiful Jamie Oliver banquet, where all the ingredients came together, and were mixed with a bit of magic, and you realised that it was going to be a bit tasty.

“Tyres took an awful lot of headlines and prominence, some people say too much, and that it turned the racing into a bit of a lottery. Occasionally, you could say that it was a touch fortuitous for some teams, to luck into a result, without really realizing why they were doing it. But it still created great racing.”

He goes on to mention about weather also playing its hand in transpired events earlier this year, especially when it came to Malaysia, where when rain came into the mix, “Formula One does get very, very interesting“, as Crofty mentioned about Bernie Ecclestone being derided for saying that F1 should “turn the sprinklers on.” Well, Bernie was right in that respect, with McLaren showing big weaknesses in the Sepang conditions, with Ferrari and Sauber showing them up royally, and this related to both tyres and weather, so it can really spice things up to no end.

Crofty’s enthusiasm as a fan of Formula One, was clear to seem as his excitement is paramount to his love of the sport, as he loved the way 2012 really changed it all: “You have variety, in the fact that Red Bull did not hit the ground running, and taking a while to make up the losses from last year with their off-throttle blown diffuser. McLaren were the team that had everything, but with it, a touch of vulnerability and a self-destruct button at times, that was thrown into the mix.

Ferrari came with a car that wasn’t as good as they wanted it to be, but a driver, that became very apparent, was even better than anybody though he was. This season really did define what the Spaniard was all about. That just kept coming and coming, even with Kimi Raikkonen’s return, and winning with Lotus, as well as Jenson Button proving that he is one of the best drivers in the world, if he can get everything in line for him. Don’t forget though about Lewis Hamilton driving the wheels off his McLaren, and the wheels literally falling off the car at times.”

Fernando taking the F2012 beyond its limits this season (Image credit: Octane Photographic)

The general excitement from both Martin and Crofty was in no way false, as the banter, ad-libbing and prospect of what may happen just around the next corner in any of the twenty races from Melbourne to Interlagos, was happening right in front of them: “I hope that transpired to the people on their sofas and those watching in bars. I really hope that you got a sense of that, because it really was a wonderful sporting festival in 2012.”

The refreshed approach to how fans get involved with F1 entered a new era earlier this season, with Sky Sports F1 HD being unveiled at London’s Grosvenor Hotel to F1 fan websites and blogs, including the likes of BadgerGP.com, Jack Leslie, Gary Marshall and F1 Times, which Crofty felt was important to do so, as it is the core audience, and as he said sincerely: “They are the future of journalism. It has changed now, just how you get into the general media and having your own website and even a radio station. I did a few things with PitStopRadio last year, which was brilliant, having a chat on Skype, in terms of a radio station on a Monday night.”

He loves the way that interactivity has helped enhance the show for the presenting team, as well as the fans, because they have control in how they can feel part of the show itself, rather than the channel itself, which is bringing unrivalled coverage to what has been in place before. But there is a line that has to be drawn, when people want to criticise, but says that he is just a down-to-earth person: “That’s fine, I’ll take it on the chin. Some could at least make the language a little less colourful, but to actually interact with the fans is a magnificent way forward. In the past, people who were in the public eye, tended to be a little more aloof. That’s not me, as I’m a bloke who just wants to go down to the pub and talk about sport, but I’ve got more of a platform than the bloke sitting in the corner with his own tankard.” 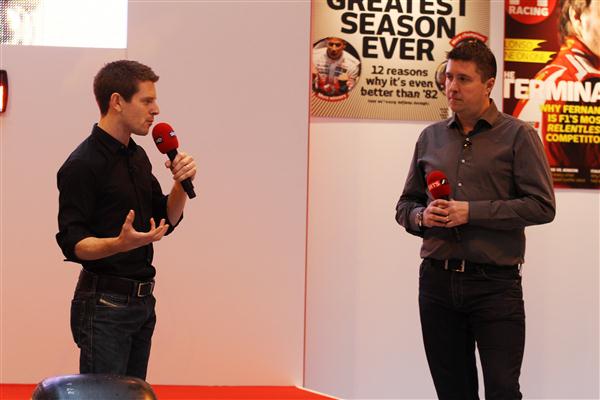 As previously mentioned, Crofty is one of the main people driving the interactivity forward, as he is working closely with Tata Communications themselves, so has first-hand knowledge of what they are bringing to the table, as well as Sky’s involvement in the future of F1 coverage to the masses: “I keep joking with them, as they may put me out of business one day, as their undersea cables get the information out quicker than the satellite feeds. As a Formula One fan these days, you can take part in so many different ways, and for Sky to come in and not embrace that would be complete folly.

“Sky is here for the future of Formula One. They have wanted it for years, and now they have the chance, and the reason why they created a channel, is because it is an extremely important sport for Sky itself. You only have to look at the amount of people who are currently subscribed and who have taken up subscriptions to be a part of it.”

Now with the car launches set to get the 2013 season underway, as well as pre-season testing giving the first indicators of who will be up at the front, Crofty gave his thoughts on the two big moves in the driver market, which were Sergio Perez to Vodafone-McLaren-Mercedes and Lewis Hamilton to Mercedes-Benz. He first commented on how Perez’s countryman, Esteban Gutierrez, would get on at Sauber, before commenting on Woking’s new acquisition: “I think Esteban will have a lot more time to get acclimatized to Formula One in his seat, than his fellow Mexican countryman will do at McLaren. And I wish Sergio the best of luck, as he’s going to need a bit of it, because the pressure that is going to be on his shoulders from the outset in Melbourne is going to be enormous. It doesn’t mean he can’t cope with it, as I’m sure he can, but it is going to be there. This is because he is not just joining a team that goes racing to win, which is what McLaren stands for, and their reason for being is to do so.”

He also goes on to mention that Sergio will have to be patient, as he has some big shoes to fill, replacing the “fastest guy on the grid,” but Crofty knows that Perez will have to score podiums and wins to have any real purpose of being there, as well as an interesting dynamic soon to arrive on the horizon at Woking: “First of all, you have to, in F1, beat your teammate, which is the same as any other driver. But bet your bottom dollar that Jenson Button will come back re-invigorated and refreshed, ready for the challenge as well. To say that though, McLaren wouldn’t have picked him if they think he couldn’t do that, so they have put a lot of faith in him, and now the faith has to be repaid. I wish him the best, as it is going to be difficult.” 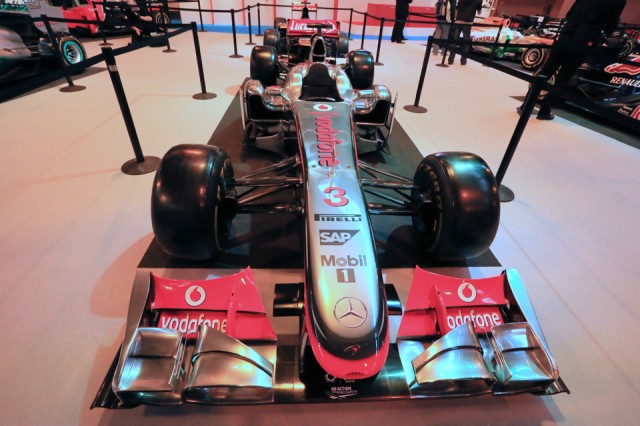 He also thinks that if he would have the choice of who would be at Sahara Force India for this season, he would pick Adrian Sutil, as well as who he feels should be at Caterham: “They know him, they like him, they trust him, and take him back again, or there may be some factors that are holding it all up, I don’t know. Caterham – Who takes that seat? Petrov could stay, Senna could come in, and even van der Garde has been mentioned.

“You’re looking for money, but looking for a good driver as well – I’d take Senna. I think he brings a combination of both money and experience, and don’t forget how many points he brought back to Williams in the second half of the season in comparison with his team-mate, who might have won a race, but didn’t do a huge amount after that, to convince us that he was a changed man.”

He says that Pastor Maldonado is great as a case study, with a bit of Jekyll and Hyde personality thrown in for good measure it seems, as Williams F1 clearly wanted him to take the safe option, and secure good points finishes. Moving on to Hamilton, he explains why the 2008 World Champion had to move away from Woking to Brackley for 2013: “To me, he made the decision, he wanted to get out of McLaren, and changed it several times until he stuck with it. He’s done the right thing, as that was what was in his heart of hearts that he really wanted to do, and once you know you’re moving, you know that the end of a relationship is coming, and you are only prolonging the agony by staying. Sometimes you just have to cut your losses and get out.” 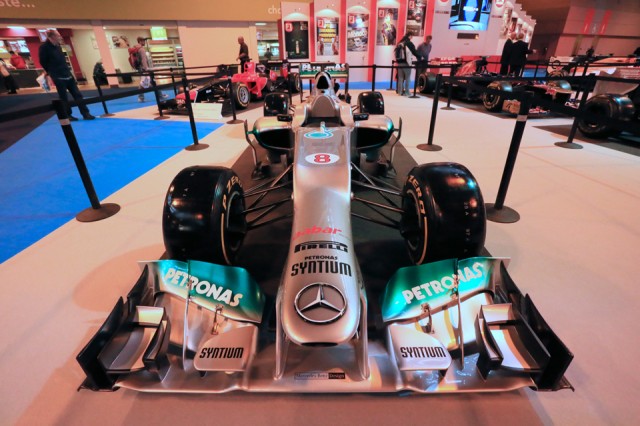 Crofty also says that the “Silver Arrows,” headed by Ross Brawn, will be able to provide Lewis with a car that will help him secure at least a couple of wins in 2013, as well as the Stevenage driver being at the fore for Qualifying, as he is clearly the man who can get the pace out of any car he drives on track.

But with the top five drivers on the grid for 2013, it is best left to Crofty himself to give us an exciting teaser, to what night transpire this year: “To see Alonso in a Ferrari, Vettel in a Red Bull, Hamilton in a Mercedes, Button in a McLaren and Kimi in a Lotus – top five drivers on the grid – all having a chance of getting pole positions and race wins in 2013? That may be what we need to better 2012…..”