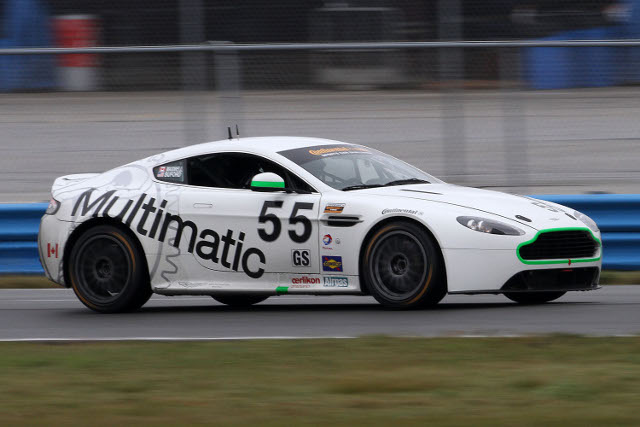 Multimatic Motorsports picked up where the left off at the end of pre-season testing as the Continental Tire Sports Car Challenge season got under way with the first practices for the BMW Performance 200 at Daytona International Speedway.

The team’s Aston Martin Vantages topped both of the Wednesday sessions, defending champion David Empringham leading the opening session in the #15 car he shares with John Farano before teammate Scott Maxwell led the day’s second session in the #55.

With times in the second session generally faster than the first the fastest five times of the day came in Maxwell’s wake. The Roush Performance duo of Billy Johnson and Jack Roush Jr. second fastest in the Mustang ahead of a trio of BMW M3 Coupes with Turner Motorsports’ #96 leading a pair of Fall–Line Motorsports entries in the top five.

Empringham and Farano were sixth fastest in the session, though their marker failed to improve upon the first practice time.

Mike Skeen and Sunoco Grand-Am 200 Challenge winner Lawrence Davey were 21st and 14th fastest (of a 35 car field in the Grand Sport class) respectively in the two practices, their best time a 1:57.695.

Joining the HART team for the race Michael Valiante – who led the Rolex Series’ ‘Roar Before the 24’ pre-season testing times – was the fastest man of the day in the Street Tuner class, lapping the 3.56 mile track in a time of 2:05.850 in the second session. The Canadian had been second fastest in the earlier session, only denied the best time in both session by a late lap from Ryan Eversley in the #75 Compass360 Racing Honda Civic.

Andrew Jordan, joining the Compass360 team for the weekend, failed to set a competitive time in either session. Problems with the #77 car limited he and James Colborn to just four laps in the opening session before having to sit out the entire second session.