Happy New Year!! After the hazy headache of the parties the year is stretched out ahead of us. In the concluding part of www.theCheckeredFlag.co.uk‘s seasonal articles reviewing the 2012 season the regulars, instead looking back take a look forward to some of the highlights that await us all in the coming 365 days.

He may only have finished fifth in the standings, but James Calado was the star of the 2012 GP2 Series season. The rookie claimed two race wins and two pole positions, and with some better luck he would have finished the year much closer to veterans Davide Valsecchi and Luiz Razia. He has since secured another year’s funding from the Racing Steps Foundation which will allow him to return to GP2 in 2013. Remaining with the Lotus GP team, his only aim is to become Britain’s second ever GP2 champion (after Lewis Hamilton), and he’ll hope to do it in convincing style too as he nears his goal of racing in F1.

This could go one of two ways: a) Hamilton gets his head down, works hard to get the team going in the right direction, and wins a couple of races before the end of the season, or b) he is skulking around the paddock with a face like thunder as early in the season as Malaysia, shows his frustration on the track with mad overtaking manoeuvres, and signs a contract to re-join McLaren in 2014 before the summer break.

If you think that 2012 was just the preview, then the 2013 FIA World Endurance Championship should be one of the ages. In half a season Toyota proved themselves to be every part as strong a rival to Audi as Peugeot were – arguably even stronger – as they took three wins in the last four races – forcing their rivals into uncharacteristic mistakes as Toyota’s sheer speed advantage proved enough to beat Audi’s greater fuel efficiency. By the time the WEC field reconvenes at Silverstone in April both teams will have had an off-season of development on their cars, trying to find a way to counter-act each others strengths while trying to improve on the areas they were the stronger in in 2012. With new cars and new teams all over the WEC grid for 2013 the UK has been given a treat by hosting the opening round of the season! 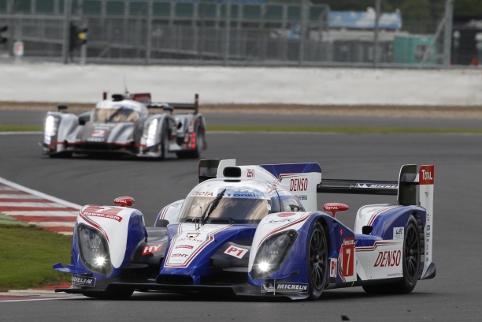 Toyota led Audi for much of the second half of 2012, but who will win in 2013 (Photo Credit: Frederic Le Floc’h/DPPI)

In 2013, V8 Supercars open up to other makes for the first time in almost two decades. The “Car of the Future” program has revolutionised the sport and paved the way for new manufacturers. A factory-backed Nissan team to be run by Kelly Racing and a privately funded Mercedes-Benz E-Class team run by Stone Brothers Racing and Erebus Motorsport will end the Ford and Holden duopoly. The new manufacturers bring with them double overhead cam engine technology, while all of cars feature a new control chassis /roll-cage design, bigger 18-inch wheels, transaxle gearbox, independent rear suspension and a mid-mounted fuel cell. Despite some aversion, new players are important to the sport’s future direction and should assure its long-term expansion and viability. Crucially, the cars are expected to be faster and more manoeuvrable, making for even more exciting racing in what is already the world’s best touring car category. If you’re after more information on the V8 Supercars’ Car of the Future, take a look here.

Alex Goldschmidt – The return to Yamaha

I’d look out for the return of Valentino Rossi to Yamaha, as his time at Ducati has been a very difficult and embarrassing venture between the 9-time Motorbike World Champion and the team. This is even though there have been constant changes to the bike, and even Audi’s last minute pleas to “The Doctor”, were not enough for the Tavullia native to remain loyal to Ducati Corse, past his original 2-year contract. Both he and Jerry Burgess were instrumental in Yamaha’s rise to becoming a MotoGP superpower over the last few years, and it would not surprise me if this duo bring back the Italian’s winning ways over the next 2 years. But his teammate Lorenzo is looking to see how Vale will once again “push very hard” to challenge for race wins on his “Baby” one again, and become a title contender once again.

There are so many things to look for next season including Lewis Hamilton at Mercedes, the Toyota and Audi WEC battle, New Formula One drivers and new BTCC rules to name just a few, but for me, with the series going from strength to strength when others are faltering, the British GT championship is definitely top of my list. 2012 was such an incredible year for the series with seven different winners in the first seven races, the closest race finish  in their history and seven championship contenders going into the final race all conspiring to make a lot of people pay attention and take note, not just within the UK but throughout Europe. More and more teams and manufacturers are wanting to take part in the Championship which already boasts a strong field and was represented by more than 14 car marques in 2012, the new season looks set to become another great year for the UK’s true premier racing series and definitely one worth watching.

While I believe he has made the wrong choice, even with the 2014 regulations likely to favour “suppliers” over “customers”, those (Hamilton included) who write off his chances of a victory in 2013 may well be surprised. I doubt the team will be capable of putting together a title challenge but the fact remains Hamilton is arguably the sport’s most exciting driver, drove exceptionally well in 2012, and is capable of pretty much anything on his day. Given it will be Mercedes’ first real attempt with its technical dream team – Ross Brawn, Aldo Costa, Bob Bell and Geoff Willis – which will actually bear fruit, there’s no reason he cannot win in 2013.

Will Rob Huff find a drive to defend his richly deserved WTCC title? Having stayed loyal to Chevrolet since the marque’s entrance into the category in 2005, Huff has developed into one of the world’s best tin-top racers, and it would be a travesty to see him miss out on the opportunity to defend his title in the wake of Chevrolet’s withdrawal.  Robert Kubica – will 2013 be the year he finally returns to top-line action after his encouraging performances in a factory Citroen C4 rally car? And familiar names in unfamiliar cars, as Lewis Hamilton drives something other than a McLaren for the first time since 2007 and Matt Kenseth leaves the Roush #17 team after 13 years, 2 Daytona 500 wins and a championship, to join Joe Gibbs Racing.

Single-seaters return to the BTCC package full-time next season, with the now redundant Formula Renault UK series finally replaced by the new-look Dunlop MSA Formula Ford Championship of Great Britain. While I remain sceptical over the decision to bolt wings onto the cars, the new EcoBoost 200’s do certainly look the part and interest in the series is high, with a number of talented drivers eyeing up a move in, ensuring the low grid numbers that plagued the series this season will be a thing of the past. The BTCC fans had frustration with Formula Renault UK for its fairly processional races, something I’m sure they won’t be able to complain about next season. Formula Ford has a history of exciting racing and it’s going to be interesting to see how this continues when the new ‘winged’ car makes its debut on the BTCC bill.

Formula Ford has gained wings and a slot on the TOCA package for 2013 (Photo Credit: Formula Ford)

I’ve seen several people say that 2013 is a year of “hiatus” for motorsport, given just how much is happening in so many different forms of motorsport in 2014. I don’t think that will be entirely correct and there are still things I’m looking forward to, not least the Le Mans 24 hours for Audi vs Toyota part two. Toyota have been magnificent this year and have taken three victories – the same number as Audi have, and particularly in the second half of 2012 appeared to be more of a match for Audi. But Audi are the kings at Le Mans, and it is shaping up nicely to be one almighty fight. I’m also interested to see how Nissan and Mercedes get on against the super teams of Holden and Ford in the V8 Supercars series. I hope that like BMW have managed in DTM that their arrival will give the series a new lease of life, even if in many ways it doesn’t really need it.

Next year, MotoGP will see the most exciting crop of rookies joining the fray for quite some time. Moto2 champion Marc Marquez is the latest in a long line of special Spaniards and could well prove to be the quickest of them all. Andrea Iannone has lit up the intermediate class with his swashbuckling style and will look to do the same in the big league while Bradley Smith will complete a British dream team with Cal Crutchlow at Tech 3. BSB frontrunner Michael Laverty will also make his MotoGP debut, taking the British contingent up to three.

Formula Ford on the BTCC bill is huge for the series. The car might now be clad with wings, but it shouldn’t stop the close and fantastic racing. Antonio Felix Da Costa is the driver to watch after his impressive form towards the end of the World Series by Renault season. He’s also a name I’d note down for the future too.

Those are our choices. Agree? Disagree? Let us know with your own choices for what to watch out for in the year ahead.