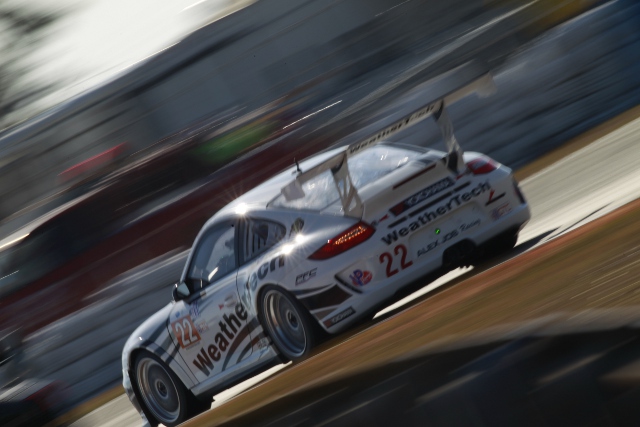 The full course caution was out for the second at the end of the fourth hour at the Sebring 12 hours.  After the Deltawing’s spectacular failure brought out the first one, the second was caused by the Extreme Speed Motorsport LMP2 car, driven by Ed Brown, after he spun and become beached on a kerb.

However, at the front of the field, it continues to be a battle for the lead between the two Audis. At the start of the hour, Marcel Fassler handed over his R18 to Oliver Jarvis. This allowed Allan McNish back into the lead in the #2 car, but it was clear that both Audis were out of synch following the Scot’s penalty for avoidable contact on an LMPC car.

McNish would eventually give the lead up when he made a visit to pit road and handed the driving duties over to Brazilian, Lucas di Grassi.

The main action in this hour was to be found in the GT class however, with a terrific battle for the lead of the category between the brand new BMW Z4 of Joey Hand and much improved SRT Viper of Dominik Farnbacher. The two almost came into contact at the daunting turn one, as Farnbacher showed his nose on the German car as the pair lapped the Leh Keen driven Alex Job Racing Ferrari 458.

The two cars would circulate nose-to-tail for some time, before Farnbacher got a run on Hand out of turn two and was able to pass cleanly for the lead in the GT class into turn three. However, there continued to be problems for their rivals, with the #4 Corvette continuing to experience electronic problems, with the #3 having already dropped several laps down due to earlier problems.

Dyson Racing’s miserable day continued as well. After having serviced the car after an earlier misfire, the Lola came crawling into the pits once more with another problem, before it was pushed behind the pit wall for the second time today. Meanwhile, Rebellion Racing and Muscle Milk Racing continue to contest “best of the rest” behind the Audis, with the HPD currently splitting the two Lola coupes for third, fourth and fifth overall.

There was also a change in LMP2 with Eric Lux passing the leading ESM car for the lead, but Level 5’s Ryan Briscoe was in difficulty and had to come into the pits for a new steering wheel.

The hour concluded with the two Audis making pit stops – the leading car, with Jarvis still on-board, pitted twenty three laps into his stint for fuel only, whilst the di Grassi car used the caution period to also come in and make a stop.