Alex Brundle was a very busy man in 2012, as he combined his world-wide travels with racing in both single seaters and sportscars, a path also travelled by his father, Martin, who now sits in the commentary booth alongside David Croft for Sky Sports F1’s coverage of the “fastest sport on four wheels”.

Having raced in the now-defunct F2 championship in 2011, Alex made the transition into GP3, joining Carlin Racing alongside Antonio Felix da Costa and Will Buller, and secured another podium finish at the Hungaroring, picking up 3rd place.

He also competed with Greaves Motorsport, who were the reigning LMP2 Champions for 2011, and drove alongside his father, as well as former Nissan GT Academy winner Lucas Ordonez, in last year’s 24 Heures Du Mans, where they finished 8th in class after 24 hours of competition. He spoke with theCheckeredFlag.co.uk during the Autosport international Show about his racing, sponsorship, the way motorsport categories should be there for the future, and much more.

We first talked about Le Mans, and he had heard a lot about the professionalism Lucas had impressed many with, but had no real expectations of how a former gamer coming into the motorsport arena would perform: “It was a good endorsement to start with. When you extend the competition to anyone that owns a Playstation, rather than just those who are able to find the budget for a given year, you’re inviting a lot of people to the party. He’s conquered all those protagonists and found himself in the position he’s in, which really did impress me.”

Then it was interesting to hear about the dynamic that was employed by both Alex and his father, the moment they walked onto the circuit grounds: “We became team mates, which is the only way it could have been. We had to somehow take the father-son emotion out of the equation, whilst still delivering results in and out of the cockpit. Then we went home and talked about it all, enjoying the experience as father and son. But when we were there, we pushed each other very hard and held one another to what the other had said in any given situation, being better for it as a result.” 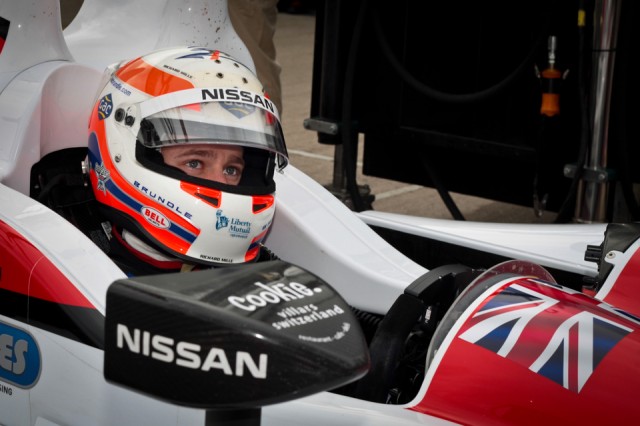 He did have his ups and downs like any other driver in any highly competitive racing series this season, but a memorable moment was when he was in the hunt for Pole Position at Silverstone, where he went all guns blazing through Maggots and Becketts. He gave a great insight into what happened that day: “That was a really interesting qualifying session, where we actually lost out quite badly in the end. I started to get traffic towards the end of the session on a wet and dry circuit. In that kind of scenario, I was really in my element, at a racetrack that I know and that I love, Silverstone being my favourite circuit. With the Carlin car, we were on the front row for both races, as well as winning both but with different organizations regarding all three drivers.

“Our car was really dialed in, and I had a confidence in the wet conditions. Sadly, as is so often the case in a series like GP3, all the ingredients didn’t gel and we didn’t get the result. As soon as I saw myself on the screens driving, which was honestly the first time that’s happened, being on the Formula One weekend. That is something you don’t see anywhere else in British F3, FPA or even Formula 2. Those screens aren’t normally up and running, apart from being used as timing screens. To see yourself driving on those screens, whilst doing your qualifying lap is distracting, pressurizing, but also inspiring.”

The new GP3/13 cars hit the track this week at the first test for all to try out the new machinery, including new GP3 drivers Jack Harvey, Dino Zamparelli and Nick Yelloly, with this feeder series seeming to go the opposite way of Formula One, which will switch back to turbocharged engines in 2014. Alex himself, only took part in the end of season test late last year with the outgoing cars, but was still working hard to get in to the series.

With sponsors like GAC, Richard Mille and Liberty IU being behind his career at the moment, Alex had nothing but praise for the way that they have helped him continue racing to this day, as well as the input that they have given to him as well: “In terms of getting the finances to run in GP3, we’ve got options, as well as a lot of interest from teams, which is great. It’s fantastic as a racing driver to feel wanted, especially when so many are interested in running you after a good rookie season.

“I’m really positive about my chances this season in GP3, and I’d like to be on the grid. I have got some decisions to make in respect of where my career will go, but when I’ve made those, I’ll be giving it 100 percent.”

Alex in action for Carlin in GP3 at Hockenheim (Image credit: Octane Photographic)

His travels around the world in both single seaters and sportscars took him to places like Brazil, where he raced alongside Bertrand Baguette and Dominik Kraimacher for OAK Racing in the 6 Hours of Sao Paolo at the latter part of last year. The trio were in the battle for the lead, until around three-quarters distance, when a fuel pressure problem caused them to retire, which shows just how cruel racing can be at times, especially when it can be so demoralizing.

“In many ways, that has been the story of my year, when it comes to what I’ve done in endurance racing. I led in my stint, and then we got caught out with a safety car, when Starworks came back at us with better tyres. We were still in the hunt, until Dom had his issue with fuel pressure,” said the Kings-Lynn driver, as the Le Mans attempt was plagued with an altenator belt issue, and even with securing Pole Position with Greaves Motorsport at Silverstone, there were still problems ahead.

“There has always been a bit of bad luck, especially when you are a driver, but to take that and use it as a positive force, there is always a little voice inside your head, asking you what’s the point in carrying on? Usually, in terms of myself, the bigger voice says ‘We could’ve won that, and we’ll win that next time!’

“That’s always what I feel like whenever that happens. In terms of driving with OAK, I really enjoyed it, as they are a fantastic team. The same can be said about Greaves, especially driving in the ELMS with them, taking third place in the overall standings. I had a pretty strong season in both endurance cars that I drove last year, and hopefully I’ll be doing that again in 2013.”

Alex is getting a chance to further his career in sportscar racing once again, as he now will take part in the World Endurance Championship for OAK Racing in the LMP2 Category, as the racing starts again on April 12th for the 6 Hours of Silverstone, where the Norfolk driver will contest a full season with Olivier Pla and David Heinemeier Hanson. But his single-seater racing antics won’t continue into 2013, but at least track time, no matter where drivers venture these days, is vitally important in developing an evolving skill set behind the wheel.

To round off our conversation about motorsport, one thing that I felt had to be asked, was the situation regarding streamlining of single-seater categories, which has been a talking point, as championships like F2 have been put out to pasture. It was interesting to hear Alex’s thoughts on the subject: “The market forces alone will not streamline the path to Formula One, because there is no certainty in a decision on where F1 teams are looking for future talent, be it as far as DTM and all the single-seater series, even as far down as karting.

“There are always going to be multiple ideas as to where to position yourself as a driver to get to F1. I think that there is an element of streamlining, but there has to be competition as well, in terms of between the series. Otherwise, you end up with teams with so much power over the driver market, that the budgets rise astronomically.”

Alex then goes to talk about the fact that the race teams are a “business,” and that they are looking to make money out of people, who are trying to get into F1, rather than doing the racing for fun: “They’re racers, because if you’re not a racer, you don’t survive. So there really needs to be a check and balance on these guys, to prevent anyone from really cornering the marketplace and drivers forced to have to stump up the big funds. So, in my honest opinion, a wider choice of series is in drivers’ favour to a degree.”

As with a lot of talented and ambitious drivers, Alex has a mature head on young shoulders, and clearly has an idea of what path is ahead of him for the future. Sportscar racing seems to be well suited to him, but I am sure that he won’t give up on single seaters just yet.

So if you want to get to see him race and have the chance to meet him in person, do not forget to buy your tickets for the first round of the WEC at Silverstone, which gets underway in just over a month’s time. So a second year at the “24 Heures Du Mans” beckons, with Alex gunning for more endurance racing success in 2013. TheCheckeredFlag.co.uk wishes him all the best for the season…