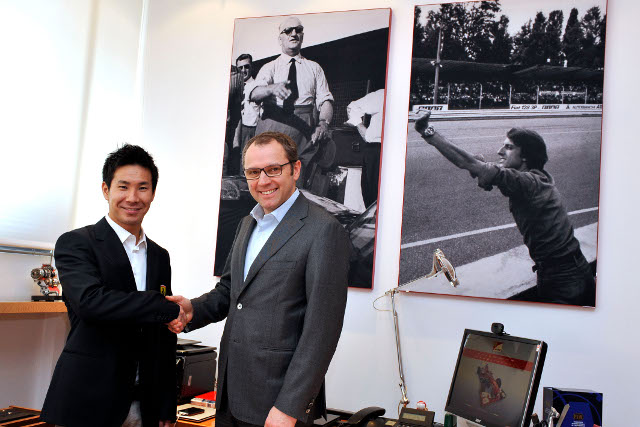 Kamui Kobayashi will race in this season’s FIA World Endurance Championship (WEC) with AF Corse it has been confirmed.

The Japanese driver, who lost his Formula One seat at Sauber over the winter months, tested with the Ferrari squad earlier in the year.

“I am pleased to be able to announce today my new role,” said Kobayashi. “It’s an honour for me to become part of the Ferrari family. It will be the first time that I compete in endurance races in a championship featuring GT cars. I can’t wait to start working with AF Corse and I really hope I can aim for the title, along with my team-mates.

“I will work hard and give my all in this new chapter in my career, knowing I can count on the support of all my fans. I would like to thank Ferrari for this opportunity and, finally, would like to dedicate this season’s new adventure to everyone in Japan, who on this very day, commemorate the second anniversary of the devastating earthquake that hit our country.”

The move looks likely to install Kobayashi into the #71 Ferrari 458 Italia in the LMGTE Pro category of the championship, though this and the identity of his co-driver for the season, has yet to be confirmed a little over a month before the WEC season begins at Silverstone.

The team dominated the series last season, winning the class with victory in five of the eight rounds, including at the 24 Hours of Le Mans, where Kobayashi will make his debut as part of the full season drive.

Kobayashi’s fellow ex-F1 drivers Giancarlo Fisichella and Gianmaria Bruni are already confirmed for the season in another LMGTE Pro entry, with a LMGTE Am entry also confirmed with drivers Jack Gerber, Matt Griffin and Marco Cioci in line for the Six Hours of Silverstone (April 14).