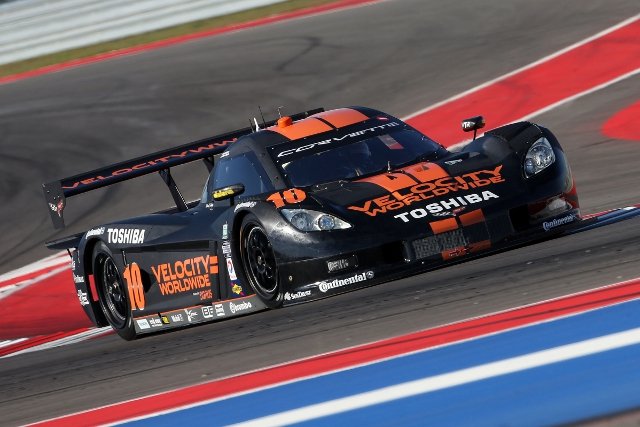 A 60-second time penalty came between Wayne Taylor Racing and fifth place in the closing stages at the Circuit of the Americas.

With less than fifteen minutes to go in the race, Max Angelelli was in fifth, trying to work back to the lead the #10 Corvette DP had held for the majority of the race. However, contact with the #6 Michael Shank Racing Ford-Riley at turn one was deemed avoidable by the stewards and Angelelli was handed a 60-second time penalty.

“I’m just speechless,” said an irate Angelelli after the race. “I really have no comment about that incident. I really cannot comment in any way, whatsoever. Our Velocity Worldwide Corvette car was fantastic. It definitely looked like the winning car. We overtook many, many cars today. We go home with a 10th-place finish. Words just cannot describe how I feel about that.”

The race had played into Wayne Taylor Racing’s hands up until that point, with 21-year-old Jordan Taylor drove a smart and steady race from second on the grid before handing over to Angelelli. Quick pit work from the Wayne Taylor crew helped Angelelli into the lead, including beating Chip Ganassi Racing’s Scott Pruett out of the pitlane with 65 minutes left in the race.

The pit lane battle with Pruett continued into the drivers’ outlap before Pruett went off track, losing the entire front end of the BMW-Riley and forcing the Chip Ganassi car into the pits for repairs.

A full course caution with 30 minutes remaining was the turning point in the race for Wayne Taylor Racing, losing the lead in the pit lane due to earlier pit stops from the Ganassi and GAINSCO cars. The resulting battle ended up with Angelelli tangling with Antonio Pizzonia’s Ford-Riley.

“Our start was a bit exciting,” said Jordan Taylor. “We lost a few spots back to sixth. We were able to pick our way back up to second. Our car was very strong and I thought we had a car to win the race. We had the car in the right position for most of the race. The guys did an unbelievable job in the pits getting us out ahead of everybody, every single time. Everyone did a great job on the team. I guess it just wasn’t our day. That yellow was pretty amazing how it came at an opportune time for the 99 and the 01 cars. That’s racing, I guess. Some people have those fortunate days and I guess this was one of their days.”

By Josh Disborough
3 Mins read
The GT World Challenge Sprint Cup reaches its climax this weekend at the Circuit de Barcelona-Catalunya. the #32 Belgian Audi Club Team WRT leads the way but will face stern competition for their rivals.