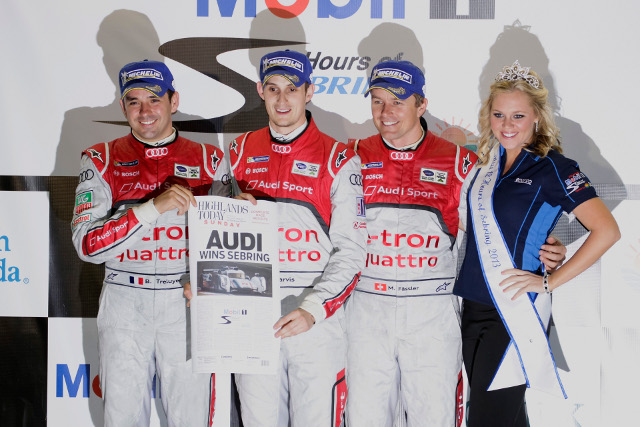 “Everything was decided during the closing stints when we had to put up a bit of a fight,” explained Treluyer. “We still had the advantage of a shorter refuelling period however, a bonus of around six seconds, which would have allowed us to win even if Tom had managed to overtake me during the penultimate stint. I took no risks when I re-joined the track and struggled to get my tyres up to temperature. In keeping with the usual approach, Audi did not issue team orders and it was up to us to sort it out on-track. It was a great race, very competitive and close-fought between both Audi cars. Fantastic!”

Due to big changes in American-based sportscar racing in 2014, a question mark hangs over the future of the 12 Hours of Sebring, with the iconic event showcasing some of the sport’s finest drivers at their very best.

“My team-mates and I had only competed at Sebring once before and this year was the final chance to enter with an LMP1 car, so the whole team was determined to take victory.” continued Treluyer. “With half of the race run we saw that we had a good chance to achieve our goal. When we arrived here, we knew that the 2013-spec R18 e-tron quattro being run by Tom, Allan and Lucas was faster. Unfortunately, our team-mates’ preparations were delayed by an off-track excursion during first practice which cost them quite a lot of time. They were not able to put as much work into set-up as we were and we set it up nicely with a good balance to compensate for the lack of performance we had compared with the new car.”

The next event for Treluyer and the rest of the Audi team is the opening round of the World Endurance Championship, the 6 Hours of Silverstone, which will see Audi take on their LMP1 rivals, Toyota.

“It’s going to be a very challenging season and we will need to grab every possible victory with both hands,” Treluyer warned. “The level of competition should be extremely high as Toyota has worked hard over the winter, so we will have to continue to do the same. The fact that the new R18 e-tron quattro was able to finish the 12 Hours of Sebring during what represented its first real endurance test is very promising. Now we must keep up the development work for the season ahead.”