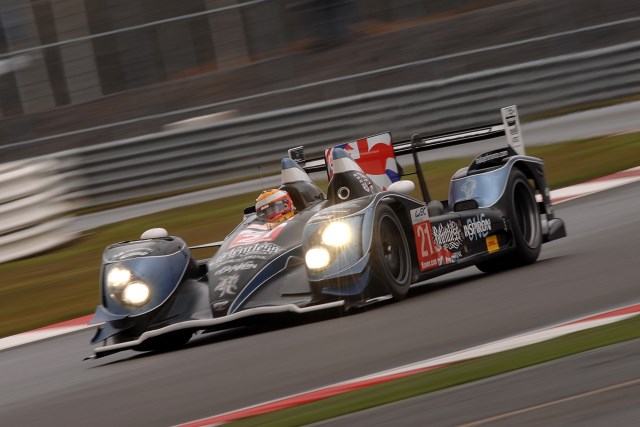 Strakka Racing will have to start the Six Hours of Silverstone from the tail of the field after failing to complete the four flying laps necessary under the new format for qualifying in the FIA World Endurance Championship (WEC).

Under the new rules for 2013 the grid is set using an average of four flying laps from the twenty minute session. However, while Danny Watts showed great pace in his two laps, a spin on the damp track limited the all-British team to just two flying laps during the session.

Watts’ pace in the #21 HPD ARX-03c was impressive his average time over two laps slower than only that of Alex Wurz in the #7 Toyota that will start the race from pole position. Unfortunately the team were caught out by the changing conditions during the session, setting out on slick tyres to start the session, just as short rain shower dampened the track. Watts spun approaching Maggotts and the delay in returning to track, added to the stop to swap onto grooved tyres and repair the –minimal – damage to the car kept the team from mounting the strong qualifying challenge Watts’ pace deserved.

“We had a downpour of rain before the start of qualifying and it was difficult to judge how damp and slippery the circuit was, so we decided to go out on slicks,” said Watts, who shares the LMP1 entry with Nick Leventis and Jonny Kane “As soon as I got to the first corner I knew it was the wrong choice. But we know from experience that it can dry very quickly at Silverstone and sometimes it’s better to carry on and wait for the track to come to you. But that wasn’t the case today. I’d come out of Copse Corner and was gently accelerating in a straight line, at just sixty or seventy per cent throttle, but when I changed up from third to fourth gear the rear wheels lost grip and I was just a passenger. It caught me completely by surprise; I’ve never had that happen before. I hit the wall side on and luckily only had bodywork damage. I was able to come into the pits, put intermediate tyres on, register a couple of quick laps and bring the car back for Jonny to take over. Unfortunately, we just ran out of time.”

“We wanted to start the WEC campaign strongly, but we haven’t had much luck,” said team manager Dan Walmsley. “Like most, we went with slicks at the start of qualifying to post an early fast time, but Danny had a spin on his first timed lap and had to pit for repairs. After those delays, it wasn’t possible for us to record the four required qualifying lap times. However, if we look at the average times posted, we are second fastest of all cars – but unfortunately we only recorded two lap times, demoting us to the back of the grid.”

“We’re going to lose time early in the race overtaking the GT and LMP2 cars, but we’re going to do that as aggressively as we can. We have to take chances in the first hour of the race, in order for us to push hard and try to catch Rebellion in the remaining five hours. We know our car’s quick, we’ve got great drivers, a great team spirit and we’re all focused on turning a disappointing day at the office today into a great fight-back tomorrow.”