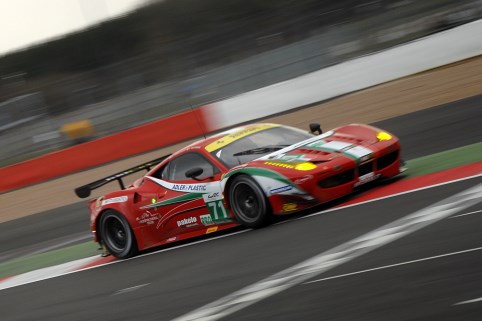 AF Corse are preparing for the next round of the FIA WEC in Sao Paolo, more than two months after the chequered flag fell at the Circuit de la Sarthe in June.

AF Corse, as part of Racing with Ferrari, will oversee four cars in the Brazilian round of the WEC – three of which are to be run by AF Corse themselves and one run by 8Star Motorsports.

Two cars will be run in GTE-Pro with Gianmaria Bruni and Giancarlo Fisichella behind the wheel of the #51 and Kamui Kobayashi sharing with Toni Vilander in the #71. They have some work to do if they want to get within a chance of winning the World Endurance Cup for GT Drivers – at the moment Romain Dumas, Richard Lietz and Marc Lieb are at the top of the table with 72 points; 15 points ahead of the Ferrari men.

The other two cars are in the AM class with 8Star drivers including team boss Enzo Potolicchio, Rui Aguas and Davide Rigon aiming for glory in the teams first year competing following Potolicchio’s departure from the Starworks Team. In the third AF Corse 458 Matt Griffin, Jack Gerber and Marco Cioci hoping to push upwards from sixth place in the FIA Endurance Trophy for GTE AM drivers table. Thankfully for them there are still five races remaining and glory is definitely a good possibility.

In the manufacturers standings, Ferrari are two points behind Porsche who have 116 and 118 points respectively – with Porsche AG Team Manthey hoping to carry on their Le Mans winning form they should provide strong competition.

The Six Hours of Sao Paolo takes place on Sunday with live coverage on Motors TV and Radiolemans.com. The Checkered Flag will have a detailed post race report as soon as the race ends.