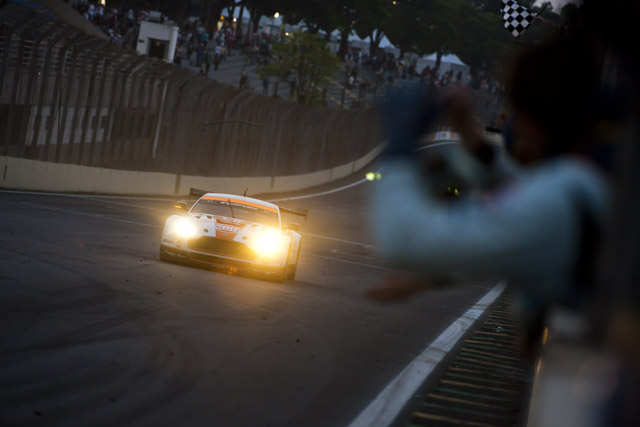 Aston Martin Racing took GTE Am victory as the FIA World Endurance Championship roared back to life in Brazil.

The #96 Vantage GTE of Jamie Campbell-Water and Stuart Hall were the class of the GTE Am field, leading from pole position to take victory in the 6 Hours of Sao Paulo by a clear 45 seconds.

“It’s really good to win the first race of the year here at Interlagos,” said Campbell-Water. “For Stuart and I it feels like just rewards, we’ve had a few unlucky races this year. We raced here together in 2007 and finished third so to come back and win is brilliant. It’s also great for Roald [Goethe], as a car collector, to win a race with the #96 Vantage GTE. Many thanks to the team and everyone involved. It’s a fantastic result for all of us.”

The team also had success in the GTE Pro category, with Darren Turner and Stefan Mucke taking the #97 Vantage GTE to second in class, just 1.4 seconds behind the winning entrant. The result also lifts the duo in to the top spot of the GTE Pro standings.

“That was a humdinger of a race,” exclaimed Turner. “The start wasn’t great – it should really have been a restart. I lost a lot of places but carefully worked my way up to P2. After that it was an battle for the lead, swapping places with the #51 throughout. It was incredibly intense and I had to focus throughout – not one lap was easy. There were no mistakes from either us or the #51 and at the end of six hours there was just 1.4 seconds between us.”

Elsewhere for Aston Martin, the #98 Gulf-liveried machine of Pedro Lamy, Richie Stanaway and Paul Dalla Lana had a tough race despite starting on pole, ending up fifth in the GTE Pro class. The #99 of Bruno Senna and Rob Bell failed to finish after collecting a spinning competitor, while the #95 all-Danish car of Kristian Poulsen, Christoffer Nygaard and Nicki Thiim led GTE Am for a period before a wheel nut failure allowed the #96 to take the victory.