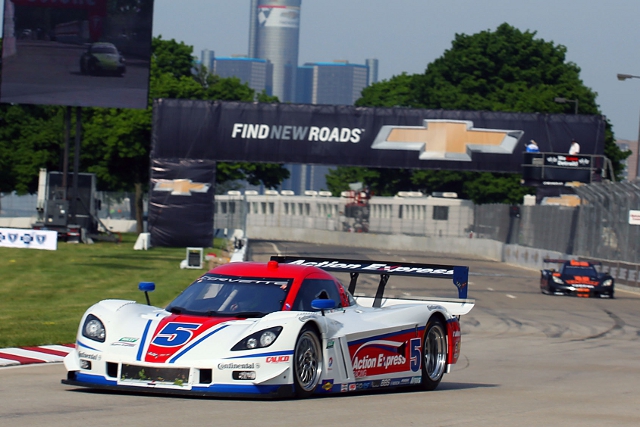 Action Express Racing went in to Laguna Seca just 16 points off the championship leaders, and had hoped to close the gap with a pair of strong finishes.

However, the team only just managed to claw one top-10 result out of the day, meaning they will be going all-out at the season finale at Lime Rock Park in three weeks time.

Christian Fittipaldi began the race from fifth in the #5 Corvette DP, moving up to fourth before the first full-course caution and the team’s first pit stop. Joao Barbosa took over from Fittipaldi, leaving the pits in second position, a position he would hold until taking the lead on lap 56.

While pitting under green flag conditions, Barbosa made contact with the pit wall on entry to the pit box, costing valuable time as the team repositioned the car before delivering routine pit service. Barbosa left the pits in twelfth position, managing to move himself back up to seventh by the time the chequered flag dropped.

“I’m disappointed in myself, I made a silly mistake coming into the pits and it lost us a lot of track position,” said Barbosa. “When it’s so competitive and tight, the pace between all the cars is very hard to make up. The No. 6 car was slowing me down a little bit so I couldn’t go by him to make my life easier. I’m just frustrated about the mistake that probably cost us a podium position. It was going to be tough but I feel like a better result than seventh was very reachable today.”

Meanwhile, the #9 sister car of Burt and Brian Frisselle had a difficult race after starting down in ninth position. Another strong pit stop from the Action Express Racing mechanics saw Brian Frisselle take over the car and leave the pits in fourth position during the caution period.

An incident later in the race meant that Frisselle was spun out and dropped to 14th, crushing the exhaust in the process. After almost 90 minutes of running, Brian Frisselle brought the car back in to the pits to hand over to brother Burt for the final few minutes after Brian suffered from the exhaust fumes inside the car.

“We had some laps that we led with the No. 5, and we had the No. 9 I think in a top-five position and it kind of went south for us today,” said team manager Gary Nelson. “The No. 9 got spun out and the No. 5 had a miscue in the pits. And we’ll have to race again at Lime Rock and try to do better. We qualified in the top-five this weekend and we moved forward in the race. All summer we’ve been able to perform on the track when the race gets going and so we’ll just put it all together at Lime Rock and we’ll be fine.”