Audi Looking To Round Off Strong 2013 Season With Bahrain Win 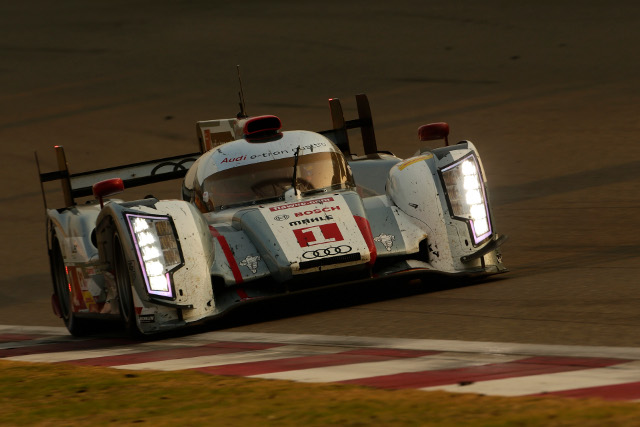 Two World Championship victories, six wins and five pole positions means that Audi head in to Bahrain with the pressure off, looking to just cap off another successful FIA World Endurance Championship season.

Following a podium result in Shanghai, the trio of Allan McNish, Tom Kristensen and Loic Duval have taken the World Drivers’ Championship away from their team-mates Andre Lotterer, Marcel Fassler and Benoit Treluyer with one race left to run. Audi have also clinched the World Manufacturers’ Championship, winning all but the Japanese round of the championship, putting them well ahead of their closest rivals Toyota.

“We’re traveling to Bahrain with the early title wins in the drivers’ and manufacturers’ classifications, and second place in the standings for our sister car has been confirmed as well,” said McNish. “This means we can tackle our tasks without any tactical constraints. No-one’s got anything to lose. We’re aiming for the seventh victory in the eighth race of the season. This year, the Audi R18 e-tron quattro seems to be even a bit better suited for this very special track in Bahrain. I’m excited.”

New regulations for the 2014 season also sees the final bow for Audi’s current R18 e-tron quattro, with almost everything changing for the new energy saving regulations. Since 2011, the R18, through various evolutions, has races in a total of 22 races, winning 13 of them, including three consecutive victories at the 24 Hours of Le Mans.

Audi will go in to the Bahrain round full of confidence, having taken victory at last year’s debut WEC race for the Sakhir circuit, where the highest temperatures of the season, up to 30 degrees centigrade, are expected. Mixed in with the changing grip levels thanks to the sand blown on to the track from the desert, Bahrain is a gruelling race for both man and machine.

“Our whole squad has achieved everything there was to be achieved early and, following the Le Mans victory, has clinched both WEC titles as well,” offered the Head of Audi Motorsport, Dr Wolfgang Ullrich. “Therefore, we can compete in the Championship in Bahrain without any pressure. It goes without saying that we’re going to be on the grid with high expectations there too. Our aim is to win in the desert, as we did last year, and to achieve a nice close of the season for Audi.”