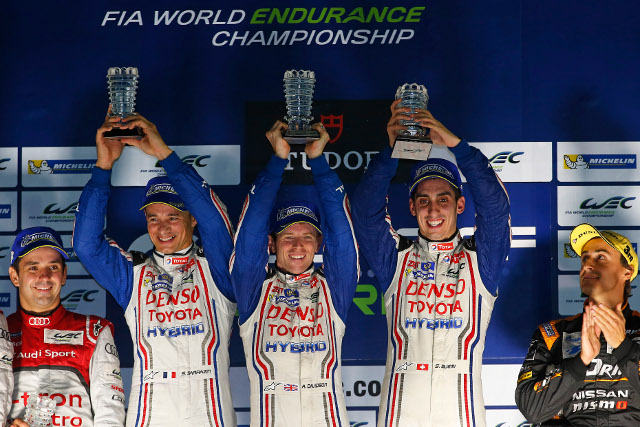 Toyota Racing have put a shine on their dull season as they claimed their first racing FIA World Endurance Championship (WEC) victory under lights in the Six Hours of Bahrain.

While you readers will argue that Toyota have actually taken two victories this year, the first came in a much shortened Fuji round which saw no laps completed under race conditions hence this classed as the first “real” victory of 2013.

It was the #8 car of Sebastien Buemi, Anthony Davidson and Stephane Sarrazin that eventually took the flag following what can only be described as a much depleted LMP1 category.

Through various problems, the last race for the Rebellion Lola-Toyota ended in retirement before the second hour and they were quickly joined by the #7 Toyota and the championship winning #2 Audi following victory in Shanghai.

That meant the only competition the Japanese manufacturer faced was the #1 Audi of Marcel Fässler, Benoit Treluyer and Andre Lotterer, but a drive through penalty for overtaking under a yellow flag saw them finish more than a minute behind the winners.

Although, in LMP2 this attrition was of benefit to the class winning G-Drive Racing Oreca-Nissan which scored an overall podium in third place. Though Roman Rusinov, Mike Conway and John Martin took the victory it was second placed OAK Racing‘s Olivier Pla, Alex Brundle and David Heinemeier Hansson that scored the teams title for the French team.

In the drivers standings it was Martin Plowman, Bertrand Baguette and Ricardo Gonzalez who got their hands on the drivers crown with nine points in hand over the above OAK trio.