Greaves Rounds Out Season With Strong Podium Result In Bahrain 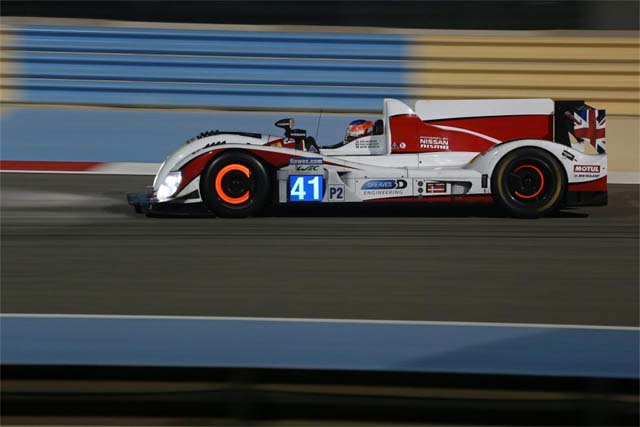 Greaves Motorsports ended its 2013 season with a hard fought podium in the 6 Hours of Bahrain.

Bjorn Wirdheim, Jon Lancaster and Wolfgang Riep all enjoyed strong periods behind the wheel of the team’s Zytek-Nissan, leading at several points during the race.

Wirdheim opened the race for the team, narrowly avoiding the first corner melee to run comfortably in the top three in class. Lancaster took over from Wirdheim but was soon back in for some bizarre repairs. His tear-off visor became lodged in the air box, resulting in Lancaster having to bring the car back in to the pits to have it removed.

Lancaster then returned to the track in his debut prototype race, showing incredibly strong pace throughout his double-stint. Riep took over from the Briton, not only making his WEC debut, but he had never driven a single seater or prototype car before the Bahrain weekend began. Riep maintained the team’s top three position before handing the car back to Wirdheim to take the flag in third place.

“It was awesome,” said Riep. “I was a little bit sad that my double stint finished, I would like to have continued because I was really enjoying myself. I have still a lot to learn but my lap times were not too bad. I did not manage to use the new tyres to the maximum because I was stuck in traffic when they were at their peak, but that aside I am really happy.”

“This was a strong performance from the whole team, a good way to finish a very long season,” concluded Team Manager Jacob Greaves. “We had a car that was able to challenge for victory but the problem with Jon’s visor meant that we were not quite there at the end of the race. Björn did a fantastic job as usual, Jon was really quick and consistent, which you would expect from a driver of his pedigree. “Wolfie” was amazing in his debut in this form of racing, further proof of the value of the GT Academy in producing real racing drivers. The Nissan/Zytek/Dunlop package was really competitive we are looking forward to 2014 and challenging for title honours once again.”