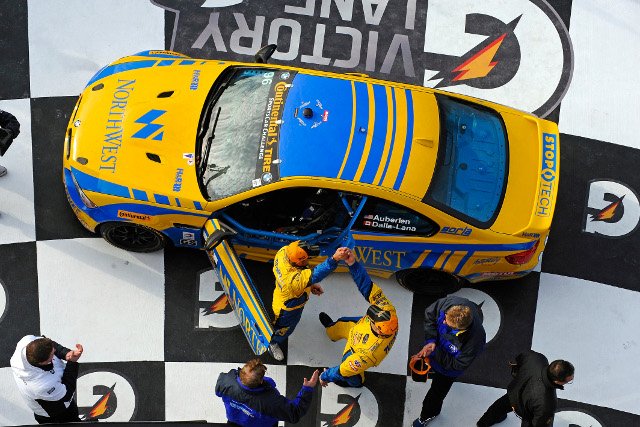 Despite a 60-second penalty following a pitstop early in the race PaulDallaLana and BillAuberlen started the ContinentalTireSportsCarChallenge season with a victory as Auberlen led the pack – under caution – across the line at the end of the two hour, 30 minute race.

Though the front of the race ended almost solely in BMWs hands it only did so after the dogged resistance of the Rum Bum Racing Porsche of Nick Longhi and Matt Plumb ended when the car cut out beneath Plumb shortly before the caution waved for the final time following a two car accident at the Bus Stop chicane on the back straight. While Plumb was able to fire the car up, he finished the race in 16th, after Longhi had raced for the lead against Fall-Line driver Trent Hindman for the opening hour of the race.

Hindman, just 19 years old, fought back from a sluggish start to take the lead from Longhi shortly after the half hour mark. Longhi himself had taken the lead from pole winner Jade Buford on the opening lap of the race. The pair swapped the lead back and forth, all the while pulling away from the third place battle between the Mustangs of Buford and Kurt Rezzatano that would be broken up when the latter pulled off with damage at the International Horseshoe, helping to bring out the second full course caution.

Longhi – back in front at that point – and Hindman pitted together, their teams foreseeing the caution period allowing Brett Sandberg to lead briefly in the Rebel Rock Racing #7 Porsche before he too pitted once the yellow did come out.

The cautions came more and more frequently during the second half of the race, Ashley McCalmont crashing heavily exiting the kink on the #00 CKS Autosport Camaro, while the ST class contrived for two multi-car incidents at the Bus Stop. First John de Barros’ mistake in the #85 Mazda 3 sent him spinning towards the Hondas of Damon Sharpe and Jorge Leroux, all three picking up damage, Sharpe arguably with the worst of it as he was hit by both de Barros and Leroux.

The race was ended following contact between Ryan Eversley and Michael Valiante as they fought over third place in ST in the closing minutes. Both cars hitting the outside wall, Valiante’s HART run Honda sustaining enough damage to prevent him from driving away.

The accident occurred just as the race was start to build to a crescendo, the Turner and Fall-Line hoards chasing down Plumb’s Porsche while, in contrast, Cory Freidman was trying to place his Autometrics Motorsports Porsche Cayman between – or preferably ahead of – the BMWs of Foss and Gregory Liefooghe.

BMW works driver John Edwards, who had taken over from Hindman in the #46 Fall-Line M3, tried an ambitious move to move up from third diving into turn one on the outside of Auberlen. He got past Auberlen, and possibly even Plumb before sailing wide, only just stopping short of the tyre wall.

He would finish fourth, falling back behind his teammates in the #48 and #47 cars. Shelby Blackstock and Ashley Freiberg finished second, Spencer Pumpelly and Steven Berthau combining for third place. Behind the Hindman/Edwards entry Tom Kimber–Smith and Michael Marsal took fifth in the other Turner Motorsports entry. Hugh Plumb and Kaz Grala completed a top half dozen of BMW M3s for Rum Bum.

Throughout the ST race the 1-Series’ of Murillo Racing and Bimmerworld could barely be separated, the two teams working together to draft away from the rest of the pack. Starting with drivers Mosing (Murillo Racing) and Tyler Cooke (Bimmerworld) the pair swapped the lead countless times. However, with the final ten minutes of race, it would have been left to Foss and Liefooghe (and possibly Friedman behind) to settle the race, if not the for the accident that occurred behind them that brought out the final caution.

Thus Foss was allowed to keep the lead unchallenged to the checkered flag, giving Murillo Racing their first win in the championship.