Hamilton heats up Bahrain for Mercedes 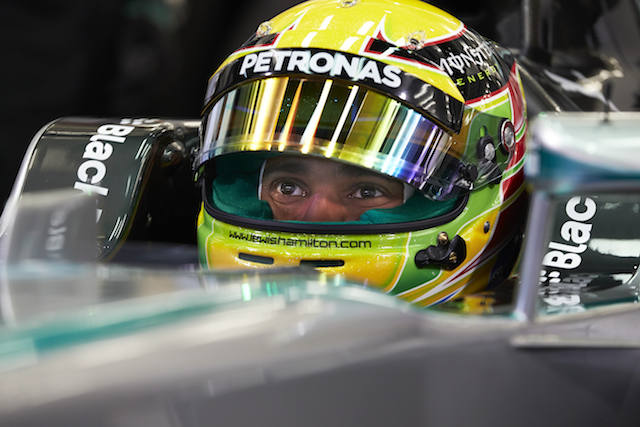 In the third day of Formula One testing in Bahrain, Lewis Hamilton again showed how dominant the Mercedes power unit could be as he led a Mercedes 1-2-3.

Using the morning running to set a series of short stints, Hamilton clocked a time of 1:34.263 which would not be beaten by any of the other runners – indeed only Jenson Button in the McLaren-Mercedes could even break the one second difference barrier setting a time seven tenths slower than his fellow Brit.

In third place it was another very productive day for Williams-Mercedes who spent much of the day focusing on pit stop practice. In the morning Felipe Massa set a 1:37.066 before practicing pit stops with Valtteri Bottas electing not to set a time and complete a series of in and out laps to aid his own pit stop education.

However, it was another day to forget for Red Bull. Australian Daniel Ricciardo could only complete 28 laps all day setting a time only good enough for ninth place after the team discovered a mechanical fault in the car which made them have to take the RB10 apart to get it fixed.

Indeed also contributing to the team’s testing troubles is the quote from Christian Horner to Autosport explaining Renault’s lack of experience with the ERS, and KERS that preceded it, have hampered the team: “If you look at the situation at Renault, Flavio made the decision years ago that energy recovery and KERS would be dealt with by the race team, not the engine manufacturer.

“Renault then sold the race team and we picked up KERS and developed our own system that we ran within the gearbox.

“Now, on the new powertrain, energy recovery has gone back to being the responsibility of the engine supplier, which is where it should sit but they have had a steeper learning curve than perhaps Mercedes or Ferrari who have a few years of experience.”

It was also another poor day for perennial back of the grid stalwarts Marussia, who had to change the Ferrari engine in Max Chilton’s car after only four laps on the books – the swap took so long they were unable to conduct anymore testing for the rest of the session.

The final day of the second of the three F1 tests gets under way at 6am UK time with teams hoping to make the most of the track time.