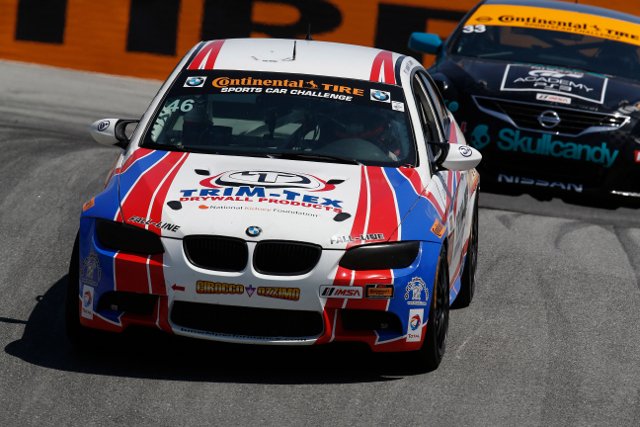 After finishing second in both of the first two races of the season the Fall-Line Motorsports duo of Trent Hindman and John Edwards scored their first Grand Sport (GS) class win of the Continental Tires SportsCar Challenge at Mazda Raceway Laguna Seca.

The race seemed to be heading down a familiar alley for the pair of BMW M3 drivers when Hindman lost the advantage of pole position to Eric Curran in the #01 CKS Autosport Chevrolet Camaro. Hindman dropped to third in the early laps, losing out of Charles Espenlaub in the #99 Aston Martin Vantage run by Automatic Racing.

However, Espenlaub was to lose second place in one of several incidents that punctuated the two hour, 30 minute race.

He tried to take the lead from Curran on the exit of the Corkscrew, moving to the outside of the Camaro around the quick left hander of Rainey Curve. Failing to see the Aston Curran moved across, pushing Espenlaub out onto the dirt where we spun before coming back, broadside across the track as the pack approached. Thankfully those drivers presented with the Invisible Glass liveried car were able to take evasive action, Billy Johnson having to launch his Mustang across the curbs on the inside of the corner to avoid contact.

Both Street Tuner runner Ramin Abdolvahabi and GS driver Scott Maxwell were the cause of full course cautions after flipping their cars in single car accidents, Maxwell rolling his Multimatic Motorsports Mustang after hitting the barrier as he pulled up out of the Corkscrew.

Between the two incidents Hindman was able to retake the lead from Curran shortly before many of the front runners made their pitstops around the halfway point of the race.

Those stops put Matt Plumb and the Rum Bum Racing team in the lead, reaping rewards of making their driver change stop – Plumb taking over from Nick Longhi – under one of the earlier full course cautions. Even with the caution periods that were to come the strategy would have thrust them into the lead battle. Their Porsche 977 had other ideas a problem with the right-rear corner prompting an unexpected, and prolonged pitstop.

Rum Bum’s desertion of the lead put the #46 Fall-Line car – now in the hands of Edwards – back to the front where he remained for the rest of the race, surviving a six minute sprint at the end of the race after a late debris caution.

Lawson Aschenbach and Curran finished second with Max Riddle and Kris Wilson completing the podium in their TRG-AMR Vantage.

Wilson drove from sixth to third in the closing minutes, passing Shelby Blackstock’s Fall-Line BMW on the restart, then BJ Zacharias and Dane Cameron in a pair of Nissan 370Z, Wilson able to outdrag Zacharias from the exit of the final corner to the checkered flag to take third by a little over a car length.

John Farano mad it three Nissans in the top six, putting the Tower Motorsports entry started by David Empringham ahead of Blackstock’s BMW.

Street Tuner turned out – aptly enough – to be dominated by the Mazda MX-5 of Freedom Autosports and CJ Wilson Racing.

The trio were formation flying at the front of the class for much of the race – though the exact running order varied throughout. The Rebel Rock Racing Porsche Boxter was the only car to be able to match the Miatas. However, the #87 team’s run came to an end when Miles Maroney stopped on track while leading with an hour remaining.

The Andrew Carbonell and Randy Pobst driven Freedom Autosports run car won the class, Carbonell able to break away from the CJ Wilson Racing pair in the final laps as Tyler McQuarrie passed Stevan McAleer in the late laps to claim second in the #3 car started by Elliott Skeer, racing in place of Marc Miller after his Sebring accident.

Behind McAleer and Chad McCumbee’s #5 Terry Borcheller and Mike LaMarra were the best of the rest in their Burton Racing BMW.