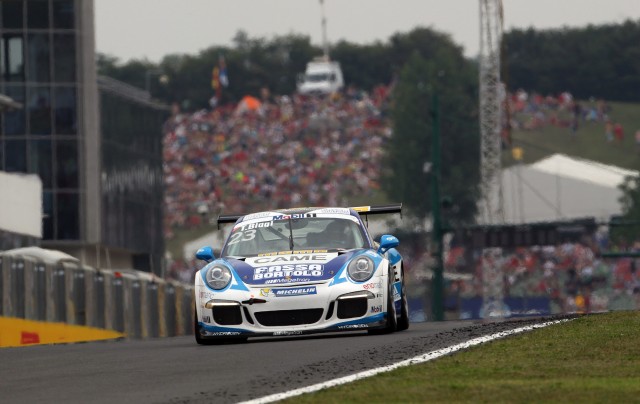 Former FIA GT champion Thomas Biagi has hardly had what one may describe as a pleasant introduction to the Porsche Mobil 1 Supercup in 2014 and once again his weekend in Budapest at the tight and twisty Hungaroring circuit was plagued by technical maladies.

Issues on Friday afternoon led to restricted practice running, never a good thing but particularly so in a series as competitive and close as the Supercup.

As such, qualifying was severely hampered and Biagi found himself in the unfortunate position of being closer to the bottom of the field than the top.

There is only so much one can do from so far down the order and credit is due to the Italian for his unflinching determination as he climbed the order to sixteenth position. Disappointingly this kept him out of the point’s positions by one single place.

The Italian summarises his weekend. “Structural problems that affect my car were clearly not fixable after qualifying, therefore I could not do anything else than damage limitation. I got the most out of a good start again and gained further positions with some successful overtaking moves. As happened in Germany (Hockenheim), I managed to end close to the points. Now we will be heading to Spa right away and on Tuesday I will run a comparative test with my teammate. Weather forecasts see some rain and wet conditions will not be great for working the programme.”

By Vince Pettit
1 Mins read
Luxembourg’s Dylan Pereira is looking to get his 2020 Porsche Mobil 1 Supercup campaign off to the perfect start after topping practice in Austria.