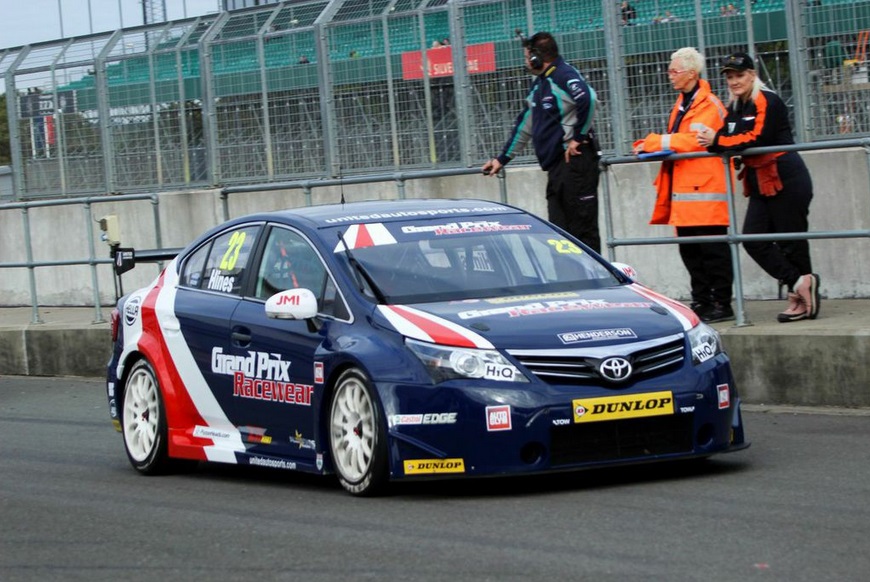 Luke Hines says he is ‘throwing himself in the deep end’ as he makes his Dunlop MSA British Touring Car Championship return this weekend at Silverstone.

The former three-time BTCC race winner will return to the series for the first time since 2005, when he last claimed victory at the same Silverstone national circuit driving for the works SEAT squad.

Replacing the suspended Glynn Geddie for the remaining two meetings of the season with United Autosports, Hines will race alongside James Cole in the second Toyota Avensis.

Hines spoke to The Checkered Flag prior to qualifying, and admitted that he is already thoroughly enjoying his return to the BTCC paddock, and aims to get stuck in instantly.

“It’s a nicer blend, massive crowds and a big show. It’s mega,” said the returning Hines to TCF. “I’m nervous, but I’m really excited as well for race one.

“I’m looking forward to the close racing too, because obviously in GT Racing it’s more about staying out of trouble. I’m sure I’m going to get stuck in there and show my nose quite a bit!”

The previous victory of Hines was in a SEAT Toledo, one which he says is a completely different kettle of fish to the current NGTC machine that he will take the wheel of this weekend.

Hines reminisced, saying: “I did win here, and I tell you what, the car is totally different to those days. They’re 200 kilos heavier, the whole dynamics of the car with turbos is totally different. I’m just trying to get my head round it at the moment.”

On the eve of qualifying, Hines admitted that he plans to enjoy his brief return to BTCC, the Silverstone visit merely a prelude to a challenge for stronger results at the Brands Hatch GP finale.

“If I can qualifying about 19th or 20th I’ll be really happy. I think the competition is really good and there’s a lot of strong drivers out there; they’re improving over the year and then I come in while they’re improving so I’m throwing myself in the deep end.

“I’m just going to enjoy it and soak up the atmosphere”, added Hines.

“This weekend I just need to get in as many laps as I can and collect all the data that I can, then at Brands I can really start to step up and show what I’ve got.”