Rees Wins as Meadows Loses Out in Carrera Cup GB 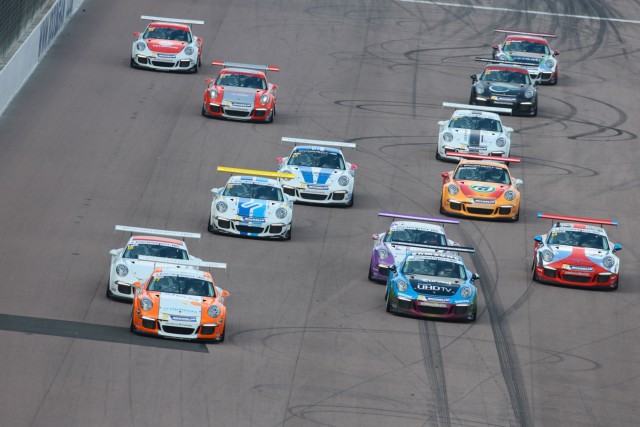 Rees successfully put to bed any memories of his miserable first race which were caused mainly by a jump start. Quite the opposite this time, a perfect getaway from the rolling grid order gave him a race lead that he would never relinquish.

Once again the safety car enjoyed an appearance, at which point it makes sense to summarise the Pro-Am1 event. Team Parker Racing man Justin Sherwood once again made a tremendous start and led Jordan Witt (Redline Racing) for much of the duration of the first lap. Approaching the Tarzan Hairpin, Witt out-braked himself and ran into the back of his rival. Sherwood pirouetted onto the grass from where he continued to an easy victory, as Witt’s similarly balletic move left him beached in the gravel.

The race leader remained untroubled by the drama and as the safety car returned to the pit-lane he was able to drive away to a popular race win. “I am really, really happy. It is such a good feeling,” said a delighted Rees.

Meadows seemed content to run second and further reduce Webster’s championship lead; the youngster had maintained third from the grid during the opening portion of the race. Then came a critical moment that saw championship momentum swing back to Webster for the first time in two weekends. The fuel pump on Meadow’s Type 991 GT3 Cup car developed an issue that brought him to a complete and utter standstill. Despite resuming the only thing he could do was cruise to the flag and watch as the series lead jumped back up to fourteen points in Webster’s favour.

Pepe Massot gave Parr Motorsport a podium and Nicholas Latifi (Redline Racing) completed an impressive debut weekend with fourth. David Walley has been somewhat overlooked in the guest car but he was impossible to ignore on Sunday afternoon, adding a fine fifth position to the seventh he achieved on Saturday for In2Racing.