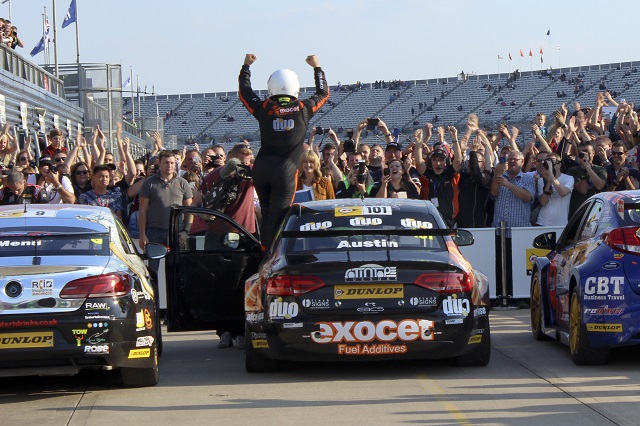 Rob Austin rekindled memories of 2013 by winning the final Dunlop MSA British Touring Car Championship race at Rockingham, leading from a demon start to the flag.

The Audi A4 of Austin – famously a winner here last year – made the perfect start to leap into the lead ahead of pole-sitter Alain Menu, a place he would ultimately stay from the moment the lights went out.

Menu could not match the pace of his Audi rival, the BMR Racing Volkswagen finishing 2.7s behind Austin as the latter lit up his tyres crossing the line for the second BTCC win of his career, Menu finally reaching the podium for the first time in the BTCC since 2000.

Behind the top two, attentions were turned to the battle for third place as Colin Turkington attempted to challenge for a potential hat-trick of race wins at the Corby circuit, making another rapid start from sixth on the reversed grid to fourth ahead of the two Triple Eight MGs.

Andrew Jordan was the man who held onto third place where he started on the grid, and soon came under intense attack from Turkington’s West Surrey Racing BMW 125i.

The championship leader kept the pressure on Jordan throughout the opening half of the 16-lap race, but backed out of attempting any kind of lunge for the final podium position on the Pirtek Racing Honda Civic.

Turkington came briefly under pressure himself from the Airwaves Racing Ford Focus of Mat Jackson, who gave a look inside the BMW almost into Tarzan on lap 10 of the race as the queue formed behind the Honda of Jordan for third spot.

The reigning champion held off the attentions of all behind him for a hard-fought podium finish, Turkington extending his lead once again after former main championship rival Gordon Shedden failed to finish for the first time this season.

The Honda Yuasa Racing driver was left trundling back to the pits after the opening lap, Hunter Abbott’s fine weekend ending in disappointing style after he was turned around by the MG of Marc Hynes at Pif Paf.

Rob Collard moved steadily through the top 10 pack from ninth place up to sixth by the flag, the WSR BMW completing his charge with a swift move on Jason Plato‘s MG heading into the Deene hairpin on lap 12.

Matt Neal moved from 14th on the grid up into ninth place by the flag, Dave Newsham rounding out the top 10 in the AmD Tuning Ford Focus.

Dan Welch made contact with Simon Belcher that sent the latter into a spin at the banking, while Martin Depper suffered an off and Aiden Moffat retired with a mechanical problem.

After a stellar weekend at Rockingham, Turkington now leads by 55 points ahead of Plato heading to Silverstone on 27/28 September.