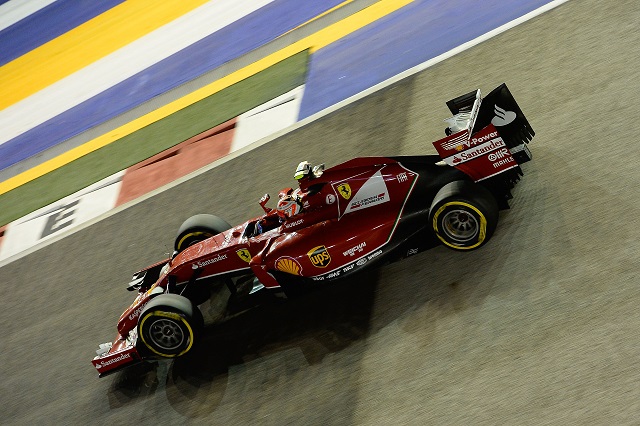 After having an apparent underwhelming season, Kimi Raikkonen feels he and his Scuderia Ferrari team have turned the corner, with the Finn believing way the car felt beneath at Singapore was the best it has been throughout the whole Formula 1 season.

Raikkonen has stated that the team has been working all year to iron out the problems that have affected the 2007 World Champion, but now he is eager to continue his stronger-looking form into the Japanese Grand Prix this weekend at Suzuka and beyond.

“We have improved race by race and my feeling has improved, but it’s hard to be very specific about just why I felt better,” said Raikkonen. “In Singapore, we had some new parts and they helped, when combined with the tyres we were using and the characteristics of the circuit.

“It was probably the best feeling I’ve had from the car all year. It felt kind of easy to drive again. Once you get that, everything gets much easier and hopefully we keep going in this direction, with that improvement showing itself under all conditions.

“I knew it would take time, we made changes at the front end and the rear end too. It has helped the ride of the car, making it more to my liking. Singapore was the best it’s been all year and I knew what to expect in every corner. There are still a lot of areas where we can improve to get things the way I want, but it’s never been a case of not knowing what to do. It’s just that it takes time to change certain things.

I have not had to change my driving style. Changing would not make me go any faster. I can drive around some issues, but I know that is never as good as fixing the issues. I’ve been in Formula 1 quite a few years and I have never changed my driving style, nor will I, because it’s not the way to fix problems.”

Despite all the rumours hanging over his Ferrari team-mate Fernando Alonso, Raikkonen himself feels safe with a contract already in place for 2015, and insists he believes in the people at Ferrari to put the team back at the front of the field where the Finn believes the team should be.

“We have a good group of people at the factory and they have changed certain things to ensure that the mistakes which happened in the past years won’t happen anymore,“ insisted Raikkonen. “I believe a hundred per cent in the people at Ferrari and the fact that we can turn it around and put the team where it should be, at the front of the field. As for myself, I have a contract and therefore no worries about my future.”