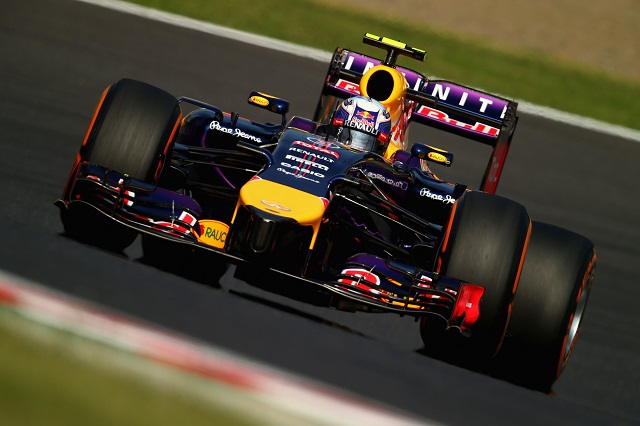 It was an eventful day for one half of the Infiniti Red Bull Racing team at Suzuka as Daniel Ricciardo caused a red flag during the second of the Friday free practice sessions in Japan after a crash. Team-mate Sebastian Vettel had a less eventful day, but admitted the Mercedes team might just be out of reach this weekend.

Ricciardo had just posted the initial fastest time in free practice two when a rare error from the Australian pitched him into the outside barriers exiting the final corner, and his session was over with only three laps completed. He dropped down the order as a result, ending the session in tenth, after finishing seventh in the earlier free practice session in the morning.

“I made a mistake in FP2,” admitted Ricciardo. “I did a quick lap and then I was trying to get a good exit to start the next one. We were trying to cool the tyres and there was a yellow flag so I was trying to go slow enough to miss it at the start of the lap, but I think the tyres cooled too much and I was too hard on the throttle for the situation and lost the car.

“It’s of course not what I wanted in the first ten minutes of the second session, but I’ll learn from it. It’s not ideal as we missed running this afternoon, but Sebastian did a full session so we will be able to see his data. The Mercs were really quick today, we think we’re there but then they pull a gap. I think we should be able to be third on the grid.”

Team-mate Vettel, a four-time winner around Suzuka, was ninth in FP1 and fifth in FP2 but feels third is possibly the best the team can hope for in Japan this season with the Mercedes drivers as quick up front as they are.

“I think we can definitely do better than fifth, but we may hit the limit when we get to third,” said Vettel. “Mercedes seem to be very quick around here but I think we can improve, especially on a short run.

“It would be nice to fight the Mercedes in the race, who knows if it rains, but otherwise we will be against Williams, McLaren, who seem stronger here, and Ferrari.”