Daniel Ricciardo: “It was pretty much a faultless race” 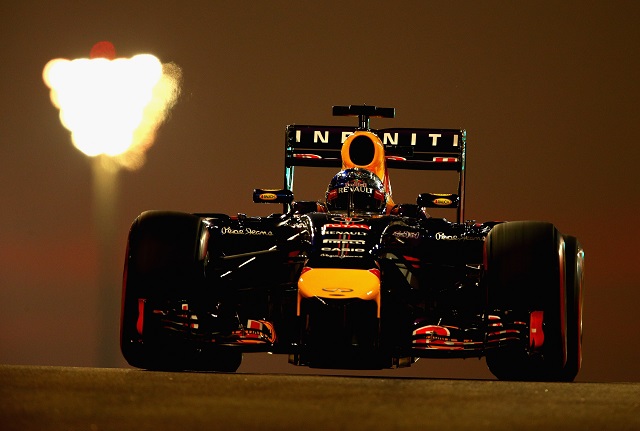 Both Infiniti Red Bull Racing drivers started the Abu Dhabi Grand Prix from the pit lane and finished in the points, but it was Daniel Ricciardo who got the better of Sebastian Vettel, with the Australian finishing fourth and the German eighth.

Ricciardo, who had already secured third place in the championship, had a very strong day on track, setting fastest lap in a race he felt was virtually faultless. He has no regrets about his first year in Red Bull, and will be looking to build on his results from 2014 when F1 returns in Melbourne in March for the 2015 season.

“I think it was pretty much a faultless race from all sides,” said Ricciardo. “From the strategy, to myself and the pit stops, everything was good so we did everything we needed to. I had fun passing, it wasn’t boring out there, so it was pretty much what I asked for. One spot better would have been nice, but fourth is really cool from the pit lane.

“It’s been pretty much a perfect season, as perfect as it can be without holding a world title, so no real regrets, no complaints. It’s nice to not only start the season well, but to finish it well also and I think all the way through it was good – we had a strong summer as well, so the start, middle and end were pretty good!”

Vettel could not match his team-mate’s performance after getting stuck behind the McLaren of Kevin Magnussen at the beginning of the race, but felt he could have finished higher than eighth.

“I felt there was more, but once I got stuck behind Kevin at the beginning it was quite tough, so I can’t be completely happy with today,” said Vettel. “When you race you want to finish as high up as you can and today I think we had the pace to finish higher.”

Vettel reflected on his past six years as a Red Bull driver after competing in his final race for the team before moving on to Ferrari from 2015. He thanked the team for everything they had done with him, including his four consecutive Drivers’ Championships.

“I think the last six years have been an incredible journey,” said Vettel. “Obviously we didn’t expect that when we started working together – you can never expect four Driver titles and four Constructors’ Championships in a row. You get to know some people in a very good way and build friendships that will last a long time.

“You go through happy days and sad days, you go through them together and I think I learned a lot. I’d like to thank Red Bull and the Team for everything they did and I will miss them. I feel ready for the next step.”

Team Principal Christian Horner praised Ricciardo for his drive through to fourth to end his fantastic first season in the team. He also thanked Vettel for his efforts while driving for the team, and insists he will always remain a friend of the team despite racing for a rival team from next season.

“A phenomenal drive from Daniel to drive from the pit lane to P4,” said Horner. “[It was] an incredible recovery after the circumstances of Saturday, signing off a fantastic season for Daniel finishing third in the World Championship and an unbelievable year.

“For Sebastian P8 isn’t reflective of his time within the Team, four world championships, 38 grand prix victories, four Constructors’ World Championships and 44 pole positions. He’s been a fantastic team member he’s been an absolutely awesome competitor. He’s been a pleasure and delight to work with and we wish him well for the future; he’ll always be a friend of the Team.

“Finally congratulations to Lewis Hamilton on achieving his second world championship, he’s a very deserving winner after the season he’s put together and it’s fitting that he won.”