Jenson Button: “I’m not sure what our race pace will be like” 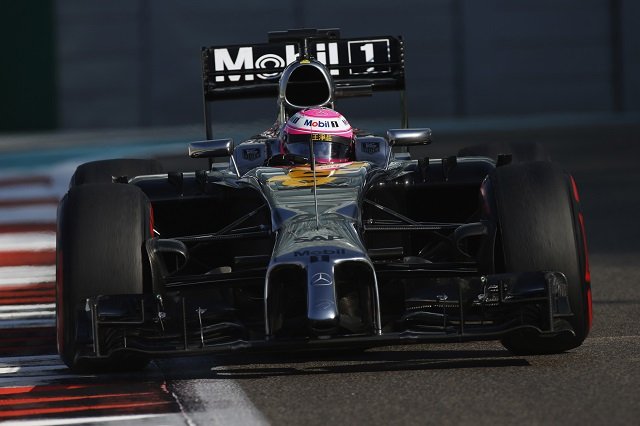 The final qualifying session of the Formula 1 season saw McLaren drivers Jenson Button and Kevin Magnussen qualify eighth and eleventh in Abu Dhabi, but with the two Infiniti Red Bull Racing machines being disqualified ahead of them, they move up to sixth and ninth respectively.

Talking before finding out he was moving up the grid, Button, who could be starting a Grand Prix for the final time on Sunday, felt he could have qualified a couple of places higher, but after his troubled practice on Friday, when he sat out the majority of FP1 and some of FP2, he was relatively happy.

“I thought we had a decent shot at getting P6 today, and in the end we were just seven-hundredths’ off,” said Button. “As the track temperature drops, you start to lose grip, and you’re never certain from which end that loss of grip will come. On my final lap, I had a lock-up into the hairpin at Turn Eight – it locked the loaded right-front wheel, which is quite unusual, so we didn’t get it quite right.

“Looking forwards, I’m not sure what our race pace will be like, as I didn’t get much running done on Friday. I don’t know where we’re going to be, but I intend to have some fun. One thing’s for sure, I’ll go out there and get the maximum out of the car.

“Considering where we were yesterday, this was an okay performance.”

Team-mate Magnussen was disappointed to be eliminated in the second part of qualifying after being delayed by traffic, but felt the car was not as strong in qualifying as it was in practice. He will move up into the top ten after the disqualification of the Red Bulls (with a free tyre choice), and the Dane is hopeful of getting a good result.

“I’m a bit disappointed, to be honest,” admitted Magnussen. “There was a bit of traffic out there, but, more important, in Q2 I struggled quite a bit with the rear of the car – it just didn’t have much grip. It felt a bit better yesterday, so we’ll have to look at why that was. “Our race performance looks promising though; certainly, our pace on the Prime tyre didn’t look too bad on Friday. So the Prime will probably be our race tyre, and we’ll be trying to get the best out of it tomorrow. “As always, our target is to score as many points as possible.”