Kimi Raikkonen: “This has been a positive weekend” 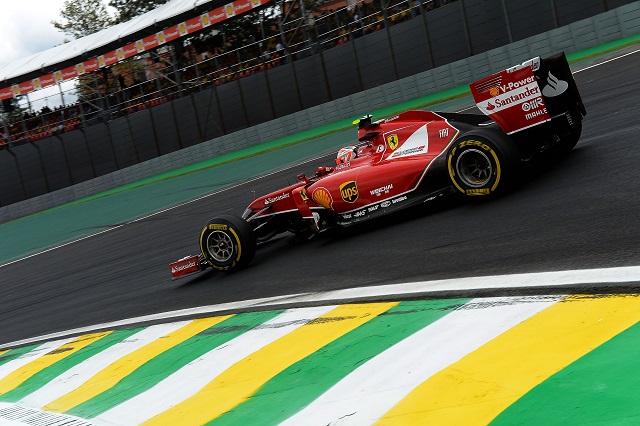 The Scuderia Ferrari team put on a good show during the closing stages of the Brazilian Grand Prix at Interlagos with a three-stopping Fernando Alonso getting the better of a two-stopping Kimi Raikkonen, with the duo ultimately finishing sixth and seventh.

Alonso was able to finish sixth in Brazil, but felt anything more would not have been a deserved result, but was happy to take a good haul of points away from the circuit after a difficult weekend.

“After a far from easy weekend, I am reasonably pleased with the outcome of the race, because even if we weren’t very competitive, we managed to score a good number of points,” said Alonso. “Today, degradation was particularly high, especially in the first stint on the Softs, which lasted less time than expected because of graining.

“When I passed Kimi, my tyres were newer than his, as he was on a two stop, but I was having to save fuel and after that overtaking move, there was nothing more I could do.

“Now there’s just one race to go this season and in terms of the Constructors’ Championship, we hope to manage to keep McLaren behind us in the final race in Abu Dhabi. As for myself, I reckon I’m in the position I deserve, because others have done better.”

Team-mate Raikkonen finished seventh having gambled on a different strategy, with the only driver to attempt a two-stop race. The Finn believed he made a better weekend in Brazil than in previous races, and felt more comfortable and confident behind the wheel. He was naturally disappointed to firstly lose time in his final pit stop, and secondly to lose positions to Jenson Button, Sebastian Vettel and Alonso in the closing laps who were all on fresher tyres.

“Overall, this has been a positive weekend and even today in the race, I felt very good in the car,” reflected Raikkonen. “During the second stint, we realised that if we went for a two-stop strategy, we could make up ground, but then, at my second pit stop, I lost valuable time and that cost me some places.

“In the final part of the race, I had to fight off Button for a few laps and when Fernando caught me, tyre degradation meant I couldn’t fend him off.

“We leave Interlagos with a good feeling and even if we still have a lot of work ahead of us, this continued progress makes me confident for the future.”