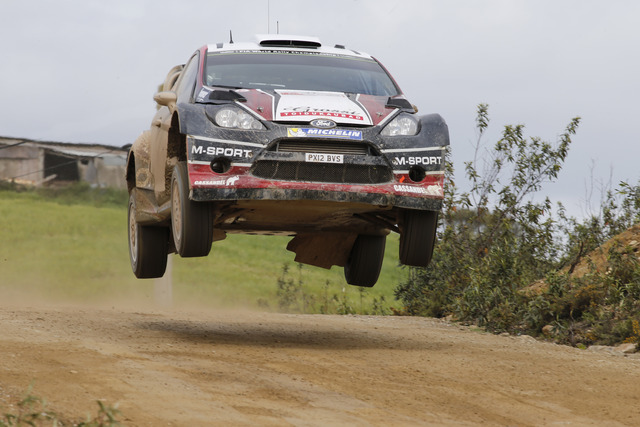 M-Sport have confirmed their 2015 World Rally Championship line up with Ott Tänak filling the seat that the outgoing Mikko Hirvonen occupied this year.

Tänak will join Elfyn Evans who has had an impressive first full season in the top WRC class to form a promising partnership in the Ford Fiesta RS WRC.

Estonian driver Tänak saw WRC action in Sweden and Portugal earlier this year but has shown that he has lost none of his pace as he run as high as second place at Rally de Portugal.

The M-sport team have been working hard on an upgraded version of the Fiesta RS WRC which is set to undergo a comprehensive test programme before the end of the year.

“I’m really looking forward to next year” said Evans. “We’ve had a great first season and gained so much knowledge and experience of the events. There’s going to be a lot of hard work next year – analysing all of the data that we’ve collected from all of the rallies – but I’m confident that we can continue to progress and improve our speed and performance on each event.

Talking of his new team-mate for 2015 the Welshman added that Tänak and co-driver Raigo Mõlder will fit in to the dynamic of the team as they strive towards the ultimate goal – The WRC title.

“Finally I want to say a huge thanks to Malcolm [Wilson] and the team for their continued support and belief. I’m in the best possible place to progress, and none of this would be possible without every single member of the team.” he added.

A happy Tänak said he was happy to be given the opportunity  but knows it is going to be a big challenge.

“We’ll need to find our rhythm in the first few events” said the Estonian, “but I’ve been working with M-Sport for a long time and I have a lot of mileage with the Fiesta RS WRC so I hope it won’t take too long to get up to speed. We have some good experience of most of the rallies and I think that there are some events where we could do really well.

“I’ve definitely grown as a driver and I want to thank Malcolm [Wilson] for giving me this second chance. We worked really hard this year and I think we proved that we have the potential; but none of that would have been possible without Malcolm and M-Sport, and for that, I am extremely grateful.

“I’ve been overwhelmed by the support we’ve received in recent years. There are so many people out there who have stayed with us on this long journey; I am really humbled by that and truly thankful for their faith in me.”

M-Sport team principal Malcolm Wilson added “I think it’s fair to say that we will be fielding what is one of the most exciting driver pairings in the FIA World Rally Championship next year. There is no doubting the potential of Elfyn and Ott and I’m looking forward to seeing what they can do.

“Both drivers have a full season of world rally car experience and the whole team is motivated by the possibility of some break-through performances. I fully believe that both drivers are capable of challenging for the podium on a number of events and we are all looking forward to what looks set to be another thrilling year of rallying.

It’s a promising time for the team who were left to fend for themselves when Ford withdrew their works backing at the end of the 2012 season.

“We have some exciting developments for the Fiesta RS WRC on the horizon and we plan to implement these upgrades as the season progresses. The signing of Elfyn and Ott has brought a real enthusiasm to the team and we’re all looking forward to fulfilling their potential next year.” Wilson added.