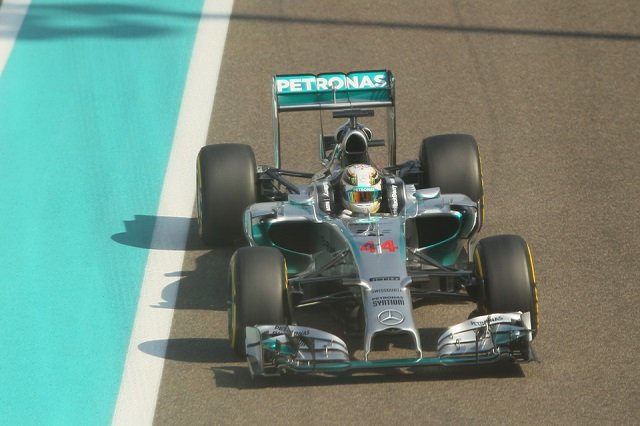 Lewis Hamilton took top spot in the opening salvo of the Abu Dhabi Grand Prix as the Mercedes-AMG PETRONAS team dominated the first free practice session in the desert.

Hamilton’s best time of 1:43.476s was 0.133s clear of team-mate and Championship rival Nico Rosberg, while Fernando Alonso was a full 1.708s back in third place as his final weekend as a Scuderia Ferrari driver began.

The Williams Martini Racing team had a session to forget, with both Valtteri Bottas and Felipe Massa ending their sessions early after only eight and seven laps respectively. A huge part of Bottas’ bodywork broke off his car at high speed heading towards turn eleven, while similar issues affected Massa. The team had to remove the floor of Bottas’ car while they investigated the cause, with the fixings on his chassis being the likely cause, although his early lap time of 1:45.913s was good enough for eighth, while Massa was thirteenth just behind Kimi Raikkonen.

The two Sahara Force India drivers of Sergio Perez and Nico Hulkenberg completed the top ten, with the Mexican just 0.047s faster than his German team-mate.

Jenson Button was another driver to only complete eight laps, as a mechanical issue saw the Briton stay in the garage for a long spell of the session while his McLaren team investigated. Team-mate Kevin Magnussen was experimenting with two different front wings during the session, switching between them on a regular basis, and finished eleventh fastest, while Button was seventeenth.

Will Stevens’ debut did not go to plan when about to leave the pit lane for his second run, the fire extinguisher in his car went off, and the Caterham team were forced to clean out his car before he could go back on track. He did get out on track late in the session for fourteen laps, but ended up twentieth and last, 2.713s adrift of team-mate Kamui Kobayashi.

Two other drivers made their free practice debut during the session, with 2014 FIA European Formula 3 Champion Esteban Ocon replacing Romain Grosjean at Lotus and Adderly Fong replacing Adrian Sutil at Sauber. Ocon ended up sixteenth fastest, just 0.355s slower than Pastor Maldonado, while Fong was nineteenth, 1.713s slower than Esteban Gutierrez. Both Grosjean and Sutil will return to their seats for the second session.

By Nick Golding
1 Mins read
This weekends Hungarian Grand Prix represents Williams final chance for a points finish before the summer break. A points finish at the Hungaroring this weekend may taste just as sweet as Nelson Piquet’s win at the venue for the team back in 1986.
Formula 1

"The Hungaroring is a circuit that I love" - George Russell

By Nick Golding
2 Mins read
George Russell is set to face his best opportunity yet of a points finish for Williams at this weekends Hungarian Grand Prix, where overtaking is very difficult making a strong qualifying essential. Can Mr Saturday rise to the challenge?
Formula 1

By Nick Golding
1 Mins read
The Uralkali Haas F1 Team will be hoping to go into the summer break on a positive note, with this weekends Hungarian Grand Prix being the final race before the summer break.