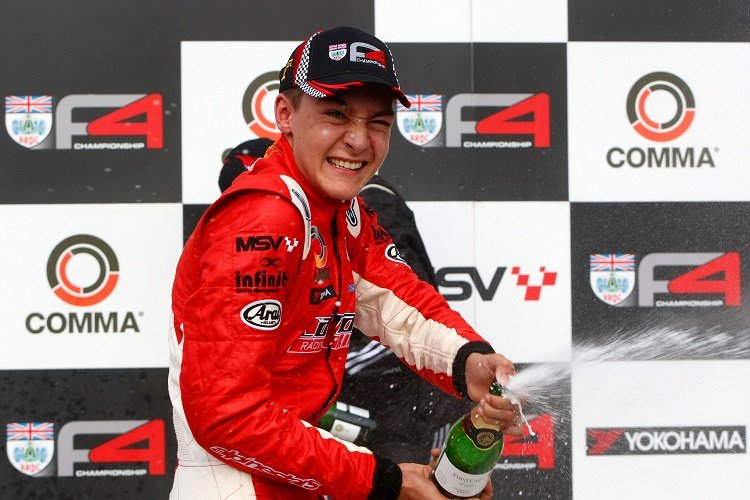 Sixteen-year-old George Russell will move up to the FIA European Formula 3 Championship in 2015 after signing with the Carlin team. He joins American racer Gustavo Menezes in the squad.

The 2014 McLaren Autosport BRDC Award winner had a busy 2014 season, winning the BRDC F4 Championship and finishing fourth in the Formula Renault 2.0 ALPS series, and also took a dominant victory in Jerez in the Eurocup Formula Renault 2.0 Series whilst running as a wild car entry for the Tech 1 Racing outfit.

The Briton, who will turn seventeen just prior to the 2015 season, will follow in the footsteps of drivers such as current Formula 1 drivers Daniel Ricciardo, Felipe Nasr, Daniil Kvyat and Carlos Sainz Jr, who at one time during their career raced for Trevor Carlin’s team.

“I am very excited to be starting the next chapter of my motor racing career with a team that has such incredible pedigree,” said Russell on Carlin’s official website. “My aim is to win races and championships and Carlin have plenty of experience in doing exactly that.

“To join the list of names that have driven for the team is a great honor and I am focused on making 2015 a strong year.”

Team Principal Trevor Carlin welcomed Russell to the team, and believes the young Briton is ready to step up into Formula 3, having impressed many with his racecraft during his 2014 F4 winning campaign.

“Despite his young age, George is very mature in the car and that’s one of the elements that most impressed us about him,” insisted Carlin. “His pace from the outset was very promising and there’s no doubt that he is ready for F3.

“He’s demonstrated great race craft and speed on his way to the BRDC F4 title last year and in the right environment we expect to see him flourish in Formula 3.”