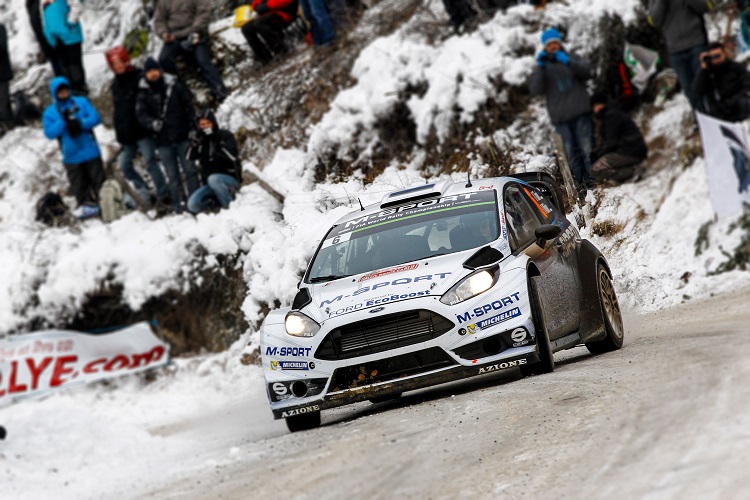 Both M-Sport Ford Fiesta RS WRC cars of Ott Tanak and Elfyn Evans got off to a strong start at the World Rally Championship season opener, the Rallye Monte Carlo, with Tanak and Evans finishing the day in fourth and sixth respectively.

Despite limited experience of the Monte-Carlo round, the duo showed plenty of composure on their way to a strong standing after a day encompassing no less than six stages.

Making their mark on a full time return to the WRC, Tanak posted the second fastest time through yesterday’s opening speed test before continuing it into today’s action.

Despite the worsening conditions, Evans and Tanak continued to balance speed with control and the Estonian driver looks on his way to his best result at the Monte-Carlo.

“It has been a very tricky day,” said Tanak. “The first pass was really icy and foggy and I was surprised to see that the conditions weren’t much better in the afternoon. It was a little better for the last two stages [SS7 and SS8], but still I think we can say that this is a proper Rally Monte-Carlo!”

Reflecting on his day, Tanak was buoyed by his progress and is aiming to continue his form across the remainder of the event.

“I think we’ve had a really good day,” said Tanak. “We’re not the fastest in the stages, but we’re keeping a good rhythm and focusing on our own rally which I think is what’s important here. As we saw this afternoon anything can still happen. We just need to remain calm and focused on ourselves for the next two days.”

Evans was also in a good rhythm as the Welshman posted the third fastest time through the first pass of ‘La Salle en Beaumont – Corps’ (SS3).

Unfortunately for Evans, the unpredictable conditions saw him slower over the second pass. Suffering a spin on SS6 he was unable to capitalise on his studded tyres, and found himself at a disadvantage as the conditions bettered for the final speed tests on the 7th and 8th stages.

“The first two stages this morning [SS3 and SS4] were very promising and I was really happy with our pace,” said Evans. “But if I’m honest this afternoon was a bit frustrating. On the first stage [SS6] – where we had the right tyres – I made a clumsy mistake; and then we just didn’t have the [tyre] package in the car for what we needed on the second two [SS7 and SS8].”

Evans called his day ‘frustrating,’ but the Welshman has time on his side as he looks to bounced back starting with tomorrow’s SS9.

“It’s been a testing afternoon, and as we saw on the last stage [SS8] anything can happen. There is still a long way to go, but at the same time, you always want to do the best you can.”