From Monaco to Suzuka, the sad demise of Marussia

With the Marussia F1 Team retaining their 2013 driver line-up of Jules Bianchi and Max Chilton for the 2014 Formula 1 season, the teams’ fifth in the sport since being accepted in 2010 (albeit under the Virgin Racing name), hopes were high that they could finally break through and take their first ever points in F1.

While they did achieve this feat with Bianchi taking a well-deserved ninth place finish around the streets of Monte Carlo in May, no one could foresee the dramatic end of 2014 that saw the Bianchi hospitalised after a horror crash in Japan and the team folding completely before the end of the season.

Much like the Minardi team that raced between 1986 and 2005, Marussia had began to make an impression on Formula 1 fans around the world, even if they were always going to be the perennial underdogs. Bianchi in particular had moments during the year outside of this Monaco weekend where he put the MR03 in places it ought not to be, such as twelfth place on the grid at Silverstone and Q3 visits in both Hungary and Belgium.

Everything was looking good after Bianchi finally broke into the top ten in Monaco, despite receiving TWO five-second penalties after starting the race from the wrong grid slot (after accidentally moving up a row along with Sauber driver Esteban Gutierrez after fifteenth place Pastor Maldonado retired before the race began) and then taking the initial penalty when he pitted behind the safety car.

The Frenchman took advantage of drivers dropping out ahead of him, and made a forceful move on the Caterham of Kamui Kobayashi to be in position to finish eighth on the road but ninth in the classified behind the Lotus of Romain Grosjean once the five-second penalty was added to his race time.

“It has been a really tough start to the season for me, the first three races were really difficult but obviously I needed a really good result like this,” said Bianchi after his Monaco result. “And the team too, they’ve been waiting for this for four years and now we have done that so I am really happy to be the driver who scored the first points for Marussia.” 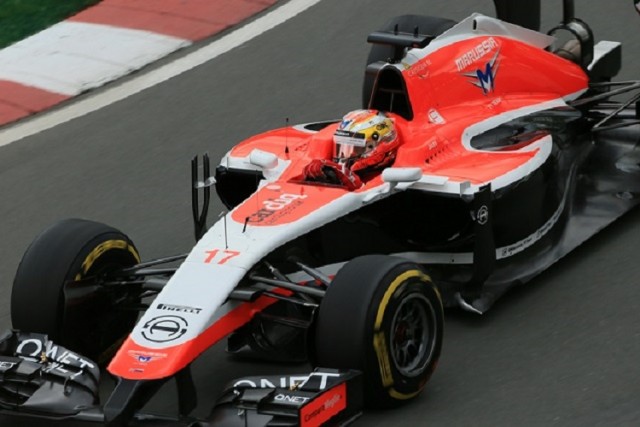 Jules Bianchi punched above his weight on more than one occasion during 2014 (Credit: Octane Photographic Ltd)

The team continued to punch above their weight, most noticeably during qualifying at Silverstone when both Bianchi and Chilton made it through to the second part of qualifying, qualifying twelfth and thirteenth respectively (although Chilton would start seventeenth after a gearbox penalty).

“A fantastic day for the Team and I’m so happy for everyone,” said Bianchi after the efforts of the team at Silverstone. “After our first points in Monaco, it’s great that we have now achieved the Team’s best ever qualifying result.

“Today’s situation was not easy and so this result is down to a combination of great strategy, judging the changing conditions to perfection and then just making the most of the windows we had out on the track when the conditions were right for the tyres.

“It was a real gamble, but we had everything to gain from taking some risks, so for the last run we put the slicks on even though the track was right at the limit.”

The first signs the team were struggling financially came at Spa-Francorchamps, when Chilton, renowned as the driver bringing in cash from his backers, was sensationally dropped and replaced by American Alexander Rossi, only to return to the seat from the second free practice session in Belgium when the financial situation was sorted.

Max Chilton was the lone driver for Marussia in Russia after Bianchi was injured in Japan (Credit: Octane Photographic Ltd)

The team fought on valiantly, but a serious crash for Bianchi in the worsening conditions at Suzuka saw the popular Ferrari-backed driver hospitalised with serious head injuries, and to this day he remains in a critical but stable condition in a Nice hospital having been transported from Japan.

Having run second (for one lap) early in the race after delaying his switch from full wet tyres to the intermediate tyres, Bianchi lost control of his Marussia at the Dunlop Curve and collided with a crane that was removing Adrian Sutil’s Sauber away after the German driver had crashed in the same place a lap earlier. The race was red flagged while the medical team attended to Bianchi before the Frenchman was taken to hospital.

It was later diagnosed that Bianchi had suffered a ‘diffuse axonal injury’, and he has yet to regain consciousness although he is breathing on his own.

With the Russian Grand Prix at Sochi just a week after the sad weekend in Japan, Marussia bravely continued, racing with only one car for Chilton with the second car built up in the garage as a mark of respect to his fallen team-mate.

“I don’t know how to put into words how truly devastated I am by what has happened to Jules,” said Chilton at Sochi. “The support from the F1 family has been incredible and all we can do is be there to support Jules’ family at this difficult time. “It is going to be a very emotional weekend for the whole team, but we will try to get through it and keep praying for Jules.”

An unfortunate suspension issue early in the race saw Chilton retire, and it would be the last time we saw the team compete in a Grand Prix. The team went into administration in the weeks following the race in Russia, and were given special disposition to miss both the flyaway races to the United States and Brazil, but were unable to return for the season finale in Abu Dhabi.

Administrators tried to find buyers and investors for the team but were unsuccessful, and during the weekend where F1 raced in Brazil, it was announced the team had closed its doors with all members of staff laid off. The F1 cars and assets of the team were ultimately auctioned off, while Haas F1, who will be debuting in F1 themselves in 2016, took purchased the Marussia base in Banbury.

From what started a promising season ended in heart-breaking fashion for Marussia, with the team scoring points for the first time only to collapse before the end of the season with their lead driver in hospital. It was even more of a shame when the team were showing genuine signs of improvement.

The crippling debts ended the Marussia dream; administrators recently admitted that well in excess of £31million was owed to creditors when the team collapsed, with more than half being owed to engine supplier Ferrari.

Manor F1 Team retain an entry for the 2015 Formula 1 season, but with many, if not all, of the assets sold off, the likelihood of seeing the phoenix rising from the flames looks like being a very distant possibility.

And of course we all hope and pray that Jules Bianchi can make a full recovery from his injuries.