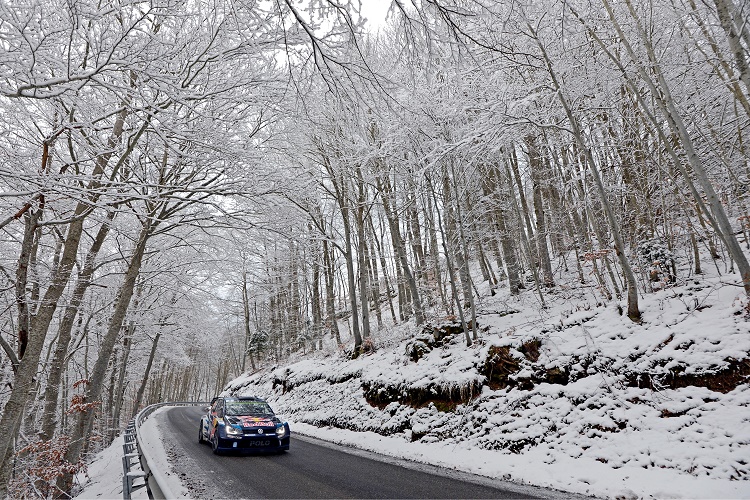 At the halfway point of the World Rally Championship season opener, the Rallye Monte-Carlo, the Volkswagen team dominate proceedings with a 1-2-3 as Sebastien Ogier topped Jari-Matta Latvala and Andreas Mikkelsen.

After the much heralded Sebastien Loeb v Ogier battle got off to a decisive lead for Loeb, Ogier improved and took advantage of the legend’s late error on SS8 to haul himself back on top in his 2015 title challenge.

The other Volkswagen duo, who had also driven intelligently to worked their way up the overall standings, also benefitted from the late drama: after 175.09 of 355.48 kilometres against the clock, Latvala and Mikkelsen rounded off the top three.

Reflecting on his comeback, Ogier talked up the battle with Loeb.

“It was a tough day with extremely difficult conditions,” he said. “I must pay a big compliment to my ice spies, who did a fantastic job. The duel with Sebastien Loeb was not only thrilling for the fans, but was also exciting for Julien and me in the cockpit. Whilst he had the advantage on one stage, I was able to make up ground on the next. In the end it proved important that I never lost my cool, even despite the gap early on. When we moved into the lead for the first time after the penultimate stage, I was able to take a deep breath. Loeb’s crash on the final stage is obviously a shame for many rally fans, as it means our duel for the lead is over.”

Turning his attention away from the French rivalry, Ogier was bullish on the stages ahead and cited conditions as a potential derailment.

“However, despite our lead, the next couple of days will be anything but easy,” he said. “The conditions, with the mixture of ice, snow and asphalt, remain extremely difficult. As such, it demands maximum concentration right through to the finish. Hopefully I will then be able to pay my fans back for the incredible support and passion I enjoy here at my home event.”

The WRC competitors were faced with extremely variable and difficult conditions. The road surface on the three special stages, each of which was tackled twice, alternated constantly between wet asphalt, snow and ice – all of which was exacerbated at times by thick fog.

It was a choice that clearly paid off in Mikkelsen’s eyes, with the Volkswagen trio set to defend their domination in the second half of the Monte-Carlo rally.

“We bet everything on safety today. I think our tyre selections in the morning and the afternoon were both good,” said Mikkelsen. “This allowed us to implement our plan to ensure we made it through the day in one piece. That was far from easy, however, as there was thick fog on some of the stages, which meant there were times when you could not see five metres ahead of you. It is also a real challenge to judge the grip in such fluctuating conditions.”

Latvala is already looking past the Monte-Carlo rally, as he sets his targets for the 2015 season.

“My goal at the start of the rally was to finish in the top four – and nothing has changed in that regard,” he said. “I have not had any particularly good results at the ‘Monte’ in the past, and I still have a lot to learn when it comes to the weather, tyre selection and the route. As such, I am happy with my position and what I learned today. Looking ahead to the championship, it is more important to score a lot of points here than to risk everything trying to win. If you compare the World Championship to the Rally Dakar, we only actually reach the finish at the end of the year. I do not intend to lose sight of our main goal.”