Maldonado returns to top on day three in Spain

Day one pacesetter Pastor Maldonado returned to the top on day three at the Circuit de Catalunya as the Lotus F1 Team driver used a Supersoft tyre run to beat teenager Max Verstappen.

The Venezuelan took over at the top from the Scuderia Toro Rosso driver during the afternoon session after Verstappen was fastest during the morning session, while also running on the Supersoft Pirelli tyre.

Lewis Hamilton was third fastest for Mercedes-AMG PETRONAS, as the top three drivers all completed over 100 laps, with Verstappen leading the way with 129 laps, although the Dutchman’s running was ended early when he pulled to the side of the circuit, necessitating a red flag.

In comparison, Marcus Ericsson could only complete 53 laps in his Sauber after a delayed morning when the gearbox issue that ended the team’s day on Friday took longer to sort out than the team hoped it would. The Swede managed to get out just before the lunch break for a couple of laps, before getting his majority of his running post-lunch, ending fourth fastest.

Sebastian Vettel was fifth for Scuderia Ferrari, but only after recovering from a spin on his initial out lap less than two minutes into the day’s activities that saw the first red flag period. He was another driver to complete over 100 laps, ending 2.059s off the pace of Maldonado.

For the second day running, Infiniti Red Bull Racing got a good amount on running, although Daniil Kvyat could not follow Daniel Ricciardo in topping the day’s times. The young Russian completed 112 laps of the Circuit de Catalunya.

Williams Martini Racing gave both Felipe Massa and Valtteri Bottas time in the car on day three, with the Brazilian finishing seventh and the Finn ninth as they concentrated on tyre testing and pit stops. Bottas took over forty laps before he managed to get a time on the board.

In between the two Williams drivers was Sahara Force India’s Pascal Wehrlein, who was running again with the team whilst on loan from Mercedes. Using the teams’ 2014 car, the young German was again concentrating on getting information about the 2015 Pirelli tyres.

Right at the bottom of the timing screens and the laps completed chart was Jenson Button, with the McLaren-Honda team suffering yet more mechanical woes as the re-designed component introduced to the car failed. The team only managed 24 laps, with the Briton being responsible for another of the red flag periods after the car stopped on track. 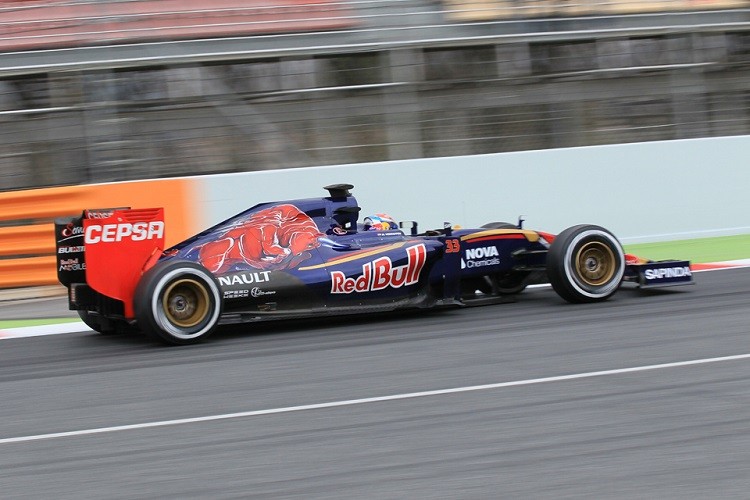 Max Verstappen was fastest in the morning before being usurped by Maldonado (Credit: Octane Photographic Ltd)