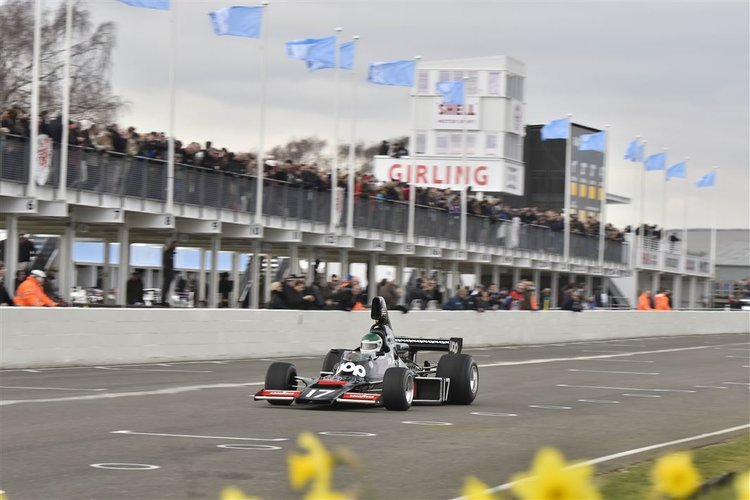 The parade included over 30 cars from the sport’s ‘high-airbox’ era (1971-1976), when manufacturers were given free rein to produce a variety of ambitious air intake designs all for the sake of enhanced engine performance.

Jarier, who recorded three podiums and three pole positions in his 11 year F1 career, was reunited with the Shadow DN5 that he campaigned successfully in the 1975 season. He drove the car to an emphatic pole position at the season opening Argentine Grand Prix, before repeating the feat at the following round in Brazil. While the Shadow DN5 struggled with durability throughout the season, it was a car that would help propel the Frenchman to future drives with Tyrrell and Lotus.

“There are so many beautiful cars here and there is nowhere in the world that organises something like this,” he told TCF. “Also we’re at the circuit on which I started testing F1 cars in 1972 with March Engineering, so I’m very happy to be back at Goodwood. It’s a beautiful place.”

“I’m also delighted to be driving this car [Shadow DN5], and although it was a little unreliable it was very fast. When I was driving [in the demonstration] I was a bit apprehensive at first because the throttle was super responsive but after two or three laps I felt very much at home.”

The demonstration was split into two separate sessions to accommodate for the huge entry list. One major change from last year’s turbocharged F1 parade was the absence of the safety car, which allowed the drivers to exhibit the full potential of their 500-plus horsepower machines.

GP2 race winner and McLaren test driver Vandoorne was on hand to drive the ex-Emerson Fittipaldi McLaren-Cosworth M23 in which the Brazilian won his second Formula 1 World Championship. He led the first of the parades, setting lap times akin to those being recorded in several of the weekend’s races.

“It’s always fun coming from the GP2 car to the older machines, especially the M23,” Vandoorne told TCF. “It felt a bit strange at the beginning of the session because clearly safety has changed quite a lot over the years so everything vibrates more and you feel the pressure of the speed a lot more. Still, they’re great fun to drive and a couple of laps in you get used to the differences, so you can push it a bit more.”

Other notable drivers taking part in the demonstration included Freddie Hunt, son of 1976 Formula 1 World Champion James Hunt, who was at the wheel of his father’s iconic 1974 Hesketh-Cosworth 308. Monaco Historic Grand Prix winner Katsu Kubota was also present, leading a trio of high-airbox Lotuses that included an ex-Ronnie Peterson Lotus 76.

Nicki Lauda’s championship winning 1975 Ferrari 312T, the screaming 1972 Matra MSI120C and the pioneering 1971 March 711 (minus the ‘tea-tray’ front wing) all provided spectators with an authentic first-hand insight into one of Formula 1’s most innovative eras.

Other highlights from the 73rd Goodwood Members’ Meeting included high speed demonstrations by Group C Le Mans cars and McLaren F1s, as well as a strong 12-race programme that helped to re-kindle the charm of the original Goodwood members’ events.

By Jasmine Butler
1 Mins read
Aston Martin brings green back to the grid as they return to Formula 1 for the 2021 season.
Formula 1

By Paolo Iantosca
2 Mins read
The Alpine F1 Team have announced Daniil Kvyat as their reserve driver for the upcoming F1 season.