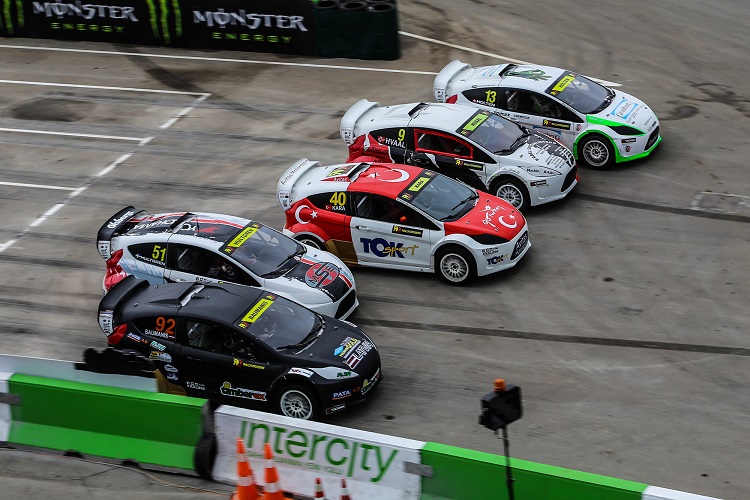 A joint venture between FirstCorner, IMG Motorsport and the Motor Sport Association has been established to find future Rallycross stars in the UK.

FirstCorner is the company behind the RX Lites Series which pitches young drivers in identical 310bhp, mid engined, four wheel drive cars, giving each driver an equal chance at success depending on talent and knowledge. The cars are built by Olsbergs MSE in association with Avitas Motorsport in Turkey. The series supports the FIA World Rallycross Championship on eight occasions in 2015 and it is WorldRX that is organised and promoted by IMG Motorsport.

The talent search offers drivers that are from a racing, rally or rallycross background and that are an MSA Competition licence holder between the age of 18 (born after 1 January 1985) and 30 (born before 31 December 1997) an chance to take part in the process that will see the top 12 finalists a chance to test an RX Lites car. The form to apply for this talent search can be found on the MSA’s official website.

The chosen 12 finalists will then have the chance to take part in an Evaluation Event that will take place on 21 May at the Lydden Hill Circuit in Kent, where they will drive one of two RX Lites cars provided by Olsbergs MSE infront of a judging panel consisting of:

The winner of this event, which takes place just before the 2015 WorldRX Of Great Britain, will then go on to take part at the RX Lites round to be held in Turkey at the Istanbul Park circuit on 3-4 October. This new initiative also has the full support of the Lydden Hill Race Circuit as well as giving the finalists an insight into how the FIA’s newest World Championship works within the Rallycross discipline.

“An RX Talent search is something that has been on our radar for some time and thanks to the FirstCorner, OMSE and Lydden Hill, we’re now able to get this project off the ground in the UK,” said Anayi.  “We believe that this is something we can roll out to other markets in the coming years as we continue to position rallycross as an attractive and affordable option for young drivers who are looking at a future career in motorsport.

“The FIA World Rallycross Championship offers incredible return on investment and we pride ourselves on having an extremely diverse range of drivers – we’ve had champion drivers competing from all motorsport disciplines including F1, rally, TouringCar and drift in our Championship.

“The RX Lites Cup currently runs at seven rounds in support of the World Championship and is the perfect stepping stone for young drivers to hone their rallycross skills before looking at the other FIA categories such as TouringCar, Super1600 and eventually the headline Supercar category.”