Rosberg and Mercedes remain on top in free practice two

Nico Rosberg continued Mercedes-AMG PETRONAS’ reign at the top of the timing screens as he led the way in free practice two in Australia.

The German set a best lap time of 1m27.697s to beat team-mate Lewis Hamilton by just 0.100s, with the two of them once again the class of the field around the Albert Park circuit.

Sebastian Vettel and Scuderia Ferrari were the best of the rest, with the German, racing for the Italian team for the first time, finishing third, just ahead of team-mate Kimi Raikkonen.

Valtteri Bottas was fifth fastest for Williams Martini Racing, but team-mate Felipe Massa was unable to participate in the session due to the team detecting a water leak on his FW37.

Daniil Kvyat was sixth quickest for Infiniti Red Bull Racing, albeit 2.319s slower than the pace of Rosberg up front. Unfortunately for Daniel Ricciardo, he was another driver to sit out the session, with the Australian becoming the first driver to require an engine change in 2015.

Carlos Sainz Jr was seventh quickest in the leading Scuderia Toro Rosso, continuing his impressive start to the season after finishing fourth in the first session, but Max Verstappen was restricted to just six laps after suffering a battery issue.

Pastor Maldonado and Romain Grosjean were eighth and ninth for the Lotus F1 Team, with Sahara Force India driver Nico Hulkenberg rounding out the top ten.

The Sauber F1 Team sent their cars onto the circuit for the first time during FP2, with Felipe Nasr finishing eleventh and Marcus Ericsson fifteenth, although the Swede was hampered by bodywork rubbing on the rear wheel that ended his session prematurely.

For McLaren-Honda, it was another disappointing session, with Kevin Magnussen causing the first red flag of the year when the Dane crashing into the barriers at turn six on just his fifth lap of the session. Magnussen was uninjured but it meant the end of his session, meaning he ended up slowest of the drivers who set a lap time in sixteenth. Jenson Button was able to complete twenty-one laps, but was only thirteenth fastest.

The Manor F1 Team once again sat out the session as they continue to solve the software issues that also caused both Will Stevens and Roberto Merhi to miss out of running in FP1. 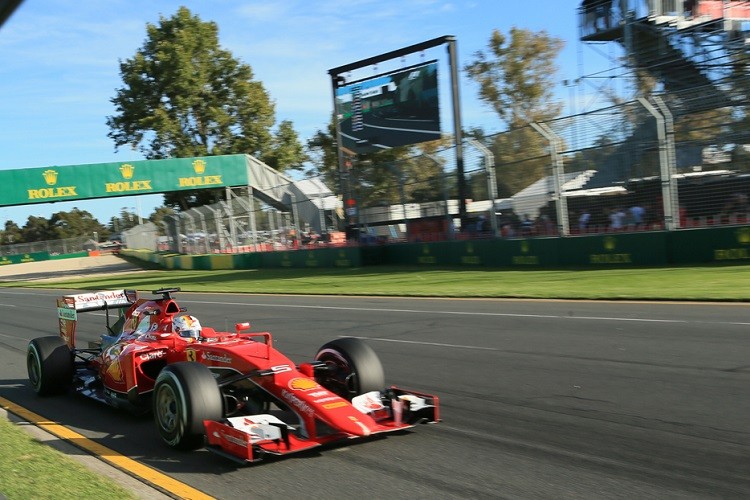 Sebastian Vettel was the only driver to get within one second of Mercedes during Friday practice (Credit: Octane Photographic Ltd)