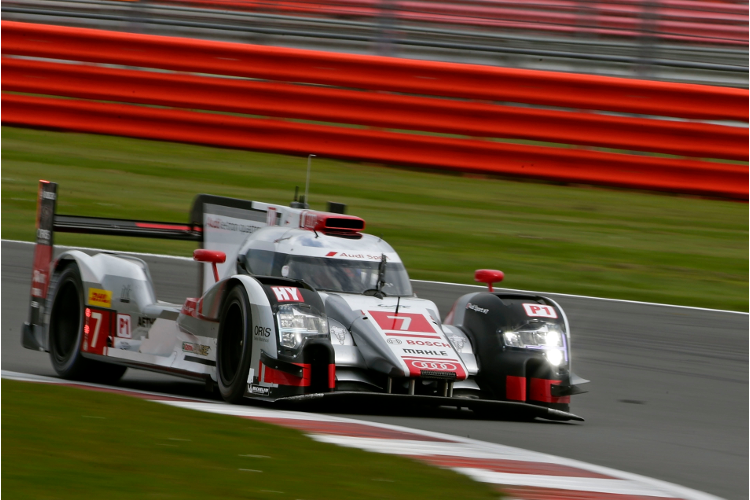 Audi Sport Team Joest continued their form at the 6 Hours of Silverstone with Andre Lotterer fastest in the #7 R18 e-tron quattro in the final practice session for the FIA World Endurance Championship (WEC) opener.

However, if the result of the session was familiar to the teams this weekend then the setting was anything but. After a day dominated by bright weather on Friday Saturday’s running got underway amidst falling rain on a wet track. Conditions did improve during the 60 minute session, fastest lap times ebbing downwards throughout with several fastest times set as the checkered flag came out.

The different track conditions allowed other teams to shine in the early running, the pair of Toyota TS040 Hybrid looking to have the best handle on the slippery track with Alexander Wurz and Sebastien Buemi taking the leading roles in taking the times down towards the two minute marker. However, it was an Audi driver – Marcel Fassler – who was the first man to dip under that bar with a 1:56.080 fifteen minutes into the session.

From that point on the top of the times were a strictly Audi affair, though the Toyotas kept improving with the weather, Kazuki Nakajima second fastest less than a second slower than Lotterer.

Lotterer, who took over the car from Fassler mid-session picked up where the Swiss driver had left off, taking the benchmark time down to 1:52.094. Marc Lieb made sure each of the LMP1 manufacturers had a spot in the top three, though his time in the #18 Porsche Team entry was more than four seconds slower.

Late improvement was the story of the session at the top of LMP2 and LMGTE Am.

Luis ‘Pipo’ Derani kept up G-Drive Racing’s streak of topping the second prototype team, but the Brazilian had to rely on his very last lap to return the #28 Ligier-Nissan to the top of the class with a lap of 2:04.835. Matthew Howson, likewise, improved his time on the final lap, taking the KCMG ORECA coupe around Silverstone in 2:07.287. Both men deposed Jonny Kane’s 2:07.672 in the Strakka Racing Dome.

It was Emmanuel Collard and Patrick Long who moved to the head of the Am class on their final laps, Collard taking the fastest time (2:16.396) in the #83 AF Corse Ferrari, co-driven by Francois Perrodo and Rui Aguas. Long was second fastest in the Dempsey-Proton Racing Porsche, having pushed Aston Martin Racing’s Francesco Castellacci down the order in the final seconds.

Fred Makowiecki’s lap of 2:13.665 made sure the #92 Porsche Team Manthey 911 RSR was fastest in LMGTE Pro with Marco Sorensen second fastest in the #95 Aston Martin Racing entry a fraction of a second behind 2:13.712.  The #91 Porsche was third fastest, AF Corse’s #71 Ferrari fourth after Davide Rigon’s lap.

With the tricky conditions came a number of mistakes with several drivers making use of Silverstone’s ample run-offs to gather moments. Only in the final ten minutes did a mistake result in the ending of a team’s session when Nelson Panciatici spun the Signatech Alpine LMP2 at Copse, coming to a stop in the gravel trap.

Neither of the Extreme Speed Motorsports HPD’s turned a lap during the session, nor did the #72 SMP Racing Ferrari from LMGTE Am.

The 6 Hours of Silverstone weekend continues with qualifying at 12 noon.

By Alice Holloway
2 Mins read
Due to the Covid-19 global pandemic, the FIA World Endurance Championship 1,000 Miles of Sebring has been cancelled and replaced with the 8 Hours of Portimao.