Kimi Raikkonen: It’s great to be back on the podium” 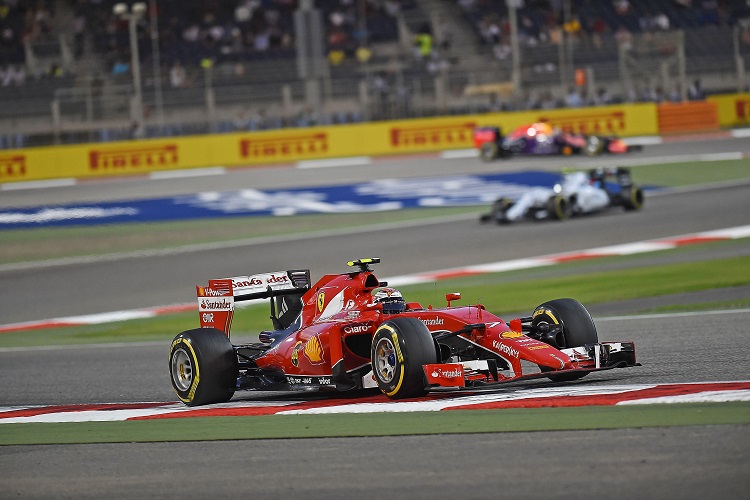 Kimi Raikkonen took his first podium finish since the 2013 Korean Grand Prix and his first since his return to Scuderia Ferrari with an impressive drive to second in Bahrain, but Sebastian Vettel had a scruffy race to finish down in fifth after an unscheduled pit stop for a change of nosecone.

Raikkonen was happy to finally return to the podium for the first time since his return to Ferrari after enduring a tough 2014 season and an unlucky opening to 2015. Despite his runners-up spot, he still revealed his fighting spirit, insisting he’ll only be truly happy when he returns to the top spot of the podium.

“After a difficult year last year and a beginning of the season that was a bit unlucky, it’s great to be back on the podium,” insisted Raikkonen. “I have mixed emotions, it’s a great feeling to be back, but we want to be on the top.

“The start was really good, I managed to pass Nico, but then I lost the position and there I lost a bit of time. The strategy was perfect, we did the right calls and the right tyre choice, I was happy with the car, we kept up a good speed through the whole race.

I think we are still a little bit behind the Mercedes but in some circuits and some conditions we can be very competitive, especially in the race. Today we did our best, we have to be happy with the result, we did the maximum and took some good points for the team.

“We keep improving step by step, we just have to keep working doing the same things in the same direction, and I’m sure we’ll get there.”

Team-mate Vettel was disappointed with his race, making a handful of silly mistakes that lost him time and ultimately places on the road with a damaged front wing. He admitted struggling with rear-end grip that ultimately left him under attack from Nico Rosberg, and then struggled to get close enough to the Williams of Valtteri Bottas at the end of the race to reclaim fourth.

“It didn’t seem to be the perfect day for me,” said Vettel. “I couldn’t get into the rhythm and lost positions when it mattered not to lose them for the final result.

“In general, I struggled a bit with the rear end and exiting the corners, which made me vulnerable to Nico’s attacks and prevented me from getting as close as I needed to Valtteri to chase him down the straight with DRS. Towards the end, I was struggling to get past in the fight against the Williams.

“When it was important to be quick, I always seemed to get stuck in traffic, and thus damaged my tyres. Overall, though, I think it has been another very positive weekend.

“It’s a shame I damaged the front wing in the race and I had to come in for a new nose, otherwise I think fourth place would have been secured, or even third.”