Dan Cammish. Any mention of the 2015 Porsche Carrera Cup of Great Britain cannot fail to be accompanied by a mention of the former Formula Ford champion. Only rookie champion Josh Webster (Team Parker Racing) and Michael Meadows (Samsung SUHD TV Racing) have bested the Yorkshireman this year. Both only succeeded once on a weekend in so doing. At least one of the trio have been on the podium at every race this season. Cammish is the only driver to have never been off it. Make no mistake, this championship is his to lose. Only a terrific come-back, or string of errors from the two sides of the championship coin will change its destiny.

To surmise the Pro classification so simply may seem flippant, yet that really is the story at the front of the field. Webster’s teammate Stephen Jelley failed to convert two pole positions at the opening round at Brands Hatch into race victories. Meadows’ teammate Nicholas Latifi stood on the podium in Oulton Park race one, then destroyed his tyres in a puncture ruined second encounter. Both have promised much. A race victory from both the expectation heading into the final four rounds. 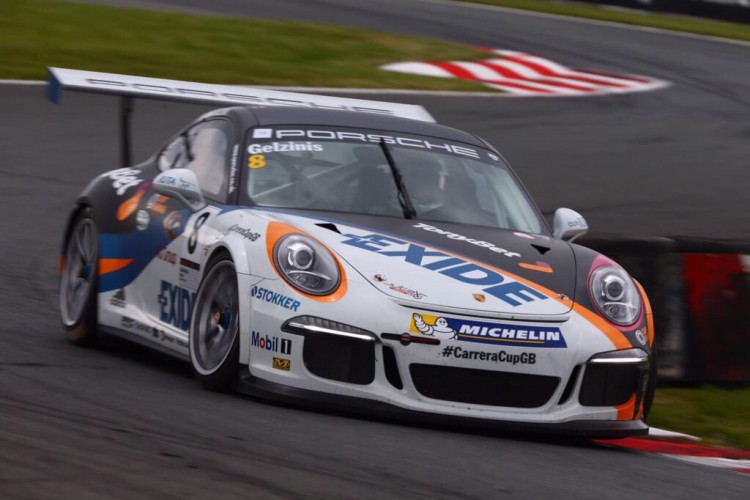 Gelzinis is a winner in Pro-Am1 (Credit: Malcolm Griffiths)

Gelzinis was victorious in the second Brands race, or rather the only survivor. In a class with decent entry figures, the carnage required to wipe out an entire class (the Lithuanian was the final classified finisher in the race, behind the Pro-Am2 contenders) cannot be underestimated.

Aside from this brief loss of sense, the class has produced some good racing with the Pro-Am1 contenders regularly harassing the higher class tailenders. This mixture has occasionally lead to incident; Leonard was a victim in the first Oulton Park race and Falla’s Croft day was ruined with a first corner clash in which he was blameless (in fairness so was Ryan Cullen, who spun his G-Cat racing machine).

So to Pro-Am2. With increased entry numbers in every class, the chance of incident was always going to thus be higher this season. Yet the amateur classification in Carrera Cup GB has attracted a lot of attention for a lot of the wrong reasons. Review the races from Croft and in both itv’s cameras honed in on battered, bruised and backwards Porsche GT3 Cup machines and invariably they were from the Pro-Am2 classification.

Yet at the other end of the spectrum, there has been the tremendous driving of people like John McCullagh (Redline Racing – 3 class wins), Graeme Mundy (In2Racing – 2 class wins) and the other three winners thus far: Juta Racing man Nerijus Dagilis at Spa-Francorchamps, GT-Marques’ Scott Marshall at Oulton Park and Asset Advantage Race Team’s Ian Dockerill in the season opener at Brands Hatch.

If the poor driving standards, which have affected the destiny of several races this season, can be dealt with then Pro-Am2 could produce some of the second half of 2015’s best racing.

The Carrera Cup GB has enjoyed a renaissance this season like few others seen in motor racing. Despite formerly having a reputation for less than exciting racing, the increased grid sizes have led to a far more intense style of driving in 2015. With four rounds left, excluding only Rockingham from the TOCA tour’s second half, the Pro class looks to be firmly settled. Yet the other two classifications remain notably open and this mixture of different drivers with different motivations going towards the finale, is sure to produce some sublime action.