The PR/1 Mathiasen Motorsports Oreca FLM09 of Tom Kimber-Smith and Mike Guasch took overall honours at the United Sportscar Championship Northeast GP, while the #97 Turner Motorsport BMW crew won the GTD class after starting from the back of the field.

Kimber-Smith inherited the lead with a daring move on Junqueira with 35 minutes to go and held the advantage through the final round of pit stops to complete the PR/1 Mathiasen team’s first PC win since the Sebring 12 Hours in March.

In third was Starworks Motorsport’s Renger van der Zande who finished a lap down, while the championship-leading CORE Autosport entry of Jon Bennett and Colin Braun narrowly missed out on a podium place. A 40 second stop-go penalty for Sean Rayhall dropped the BAR1 Motorsports car down to fifth overall, four laps behind Kimber-Smith, while Mikhail Goikhburg completed the top five for JDC-Miller Motorsports. 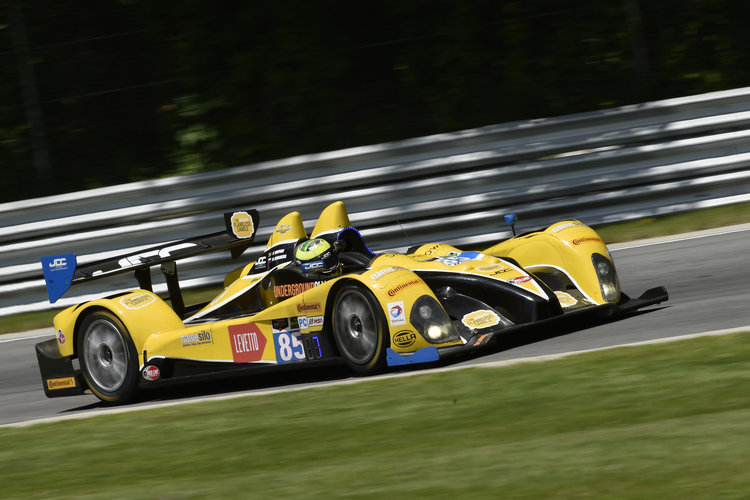 The initial pace had been set by South Africa’s Stephen Simpson in the pole-sitting JDC/Miller car, although a fuel pump relay issue put paid to the team’s chances of securing a high finish. The #85 car came to a halt at the esses mere minutes after completing its first pit stop on lap 64, triggering the first safety car of the afternoon.

Simpson’s mechanical failure bumped Conor Daly up to the lead of the race, although the Performance Tech Motorsports driver’s lead wouldn’t last long as he brought out the second caution of the afternoon following a heavy collision with the Paul Miller Racing Audi R8 of Christopher Haase.

Daly, under increasing pressure from Junqueira following the initial restart, made contact while trying to make a hasty move on the inside of the then GTD-leading Audi heading into the final turn. The resulting impact sent both drivers into the tyre wall, and subsequently forced two early retirements from the race.

This promoted Junqueira to the lead, but the Portuguese driver was eventually chased and usurped by a hard-charging Kimber-Smith, who set his team’s fastest lap in the final 30 minutes on the way to a commanding victory.

With no GTLM action on at Lime Rock Park it was the duty of the GTD field to provide the class action. Pole sitter Dion von Moltke (Paul Miller Racing Audi) led the field away and consolidated his qualifying advantage by developing an early five second lead.

Ben Keating and Patrick Lindsey put on a show in the initial battle for second position, with Lindsey in the #73 Park Place Porsche 911 going side-by-side with Keating on lap two. However, it was Christina Nielsen in the #007 TRG AMR Aston Martin who stole the show, overtaking Lindsey and pressurising Keating into a mistake at turn five that handed her the class lead with an hour gone.

The two caution periods shuffled the GTD field slightly, with the TRG AMR squad opting to bring Nielsen in early to give Kuno Wittmer a step up in track position. However, the earlier stop allowed Jeroen Bleekemolen, who had inherited Keating’s seat in the Riley Motorsports Viper, to cut back the Aston’s advantage on a newer set of tyres. Bleekemolen looked set for victory, but a daring pit stop strategy from the Turner Motorsport BMW crew allowed Prototype regular Dane Cameron to emerge as the leader.

Cameron, with a desperately tight fuel saving task ahead of him, maintained his car’s pace and tyre degradation to hold off Bleekemolen in the final stages for an unlikely victory. The win was made even more sweet by the fact that the Turner car had undergone an extensive repair job just hours before the start of the race following a heavy crash for Michael Marsal during practice.

Bleekemolen crossed the line 3.5s behind Cameron, while Wittmer brought the #007 Aston Martin home a further 14s adrift. Wittmer had been on course for a fourth place finish until Mario Farnbacher went wide on the exit of turn one. Farnbacher’s blushes were spared slightly when the chasing Andy Lally had a wild off-track moment of his own with just three minutes remaining, meaning the #23 Alex Job Porsche crew could hold on to fourth.

All four classes of the 2015 United Sportscar Championship will be reunited for the ninth round of 12 on August 9, as the series heads to Wisconsin’s famous Road America circuit.