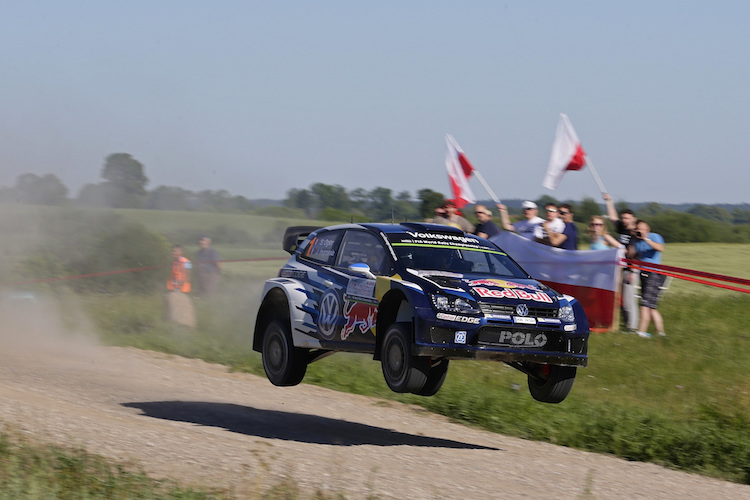 With the first 9 stages of 2015 LOTOS Rally Poland completed, it is Volkswagen Motorsport who hold the top three positions in the standings.

Out front is championship leader Sebastien Ogier, but he is only 2.1 seconds clear of teammate Andreas Mikkelsen. Further back is Jari-Matti Latvala, who sits 10.8 seconds off the pace.

One of the main factors today was tyre choice, with the unexpectedly-high temperatures harshly treating those teams that had opted to run the soft tyres, which became heavily worn on the sandy gravel surface.

After SS7, though, Ogier was leading the pack, and despite stage wins from Jari-Matti Latvala and Martin Prokop, the Frenchman remains out front heading into the second full day on Saturday.

“I’m surprised to be leading because it wasn’t a perfect tyre strategy this afternoon. It wasn’t easy to drive the loop on four soft tyres in such heat so I’m happy to bring the car home in front,” said Ogier.

Although Tanak had scored some stage wins, he ends the day in 4th place behind the Volkswagen trio, due to brake issues and incorrect tyre choice. The Estonian is 16.7 seconds behind Ogier.

Behind the leading pack is Hyundai‘s Hayden Paddon, over half a minute down, but just 1.5 seconds ahead of home favourite Robert Kubica.

Kris Meeke recovered from a roll in the shakedown, and was running in fifth until his Citroen missed a corner and went into a field, pushing him down to eighth by the end of the day.