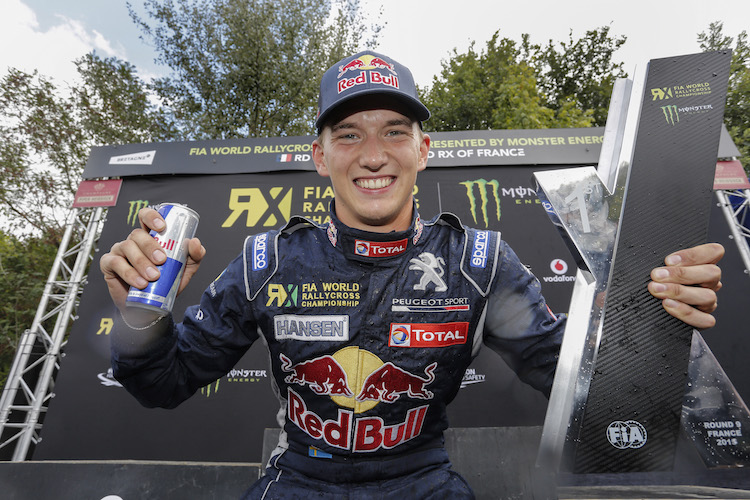 Team Peugeot-Hansen achieved their target of taking a fourth win in the 2015 FIA World Rallycross Championship as Timmy Hansen dominated the WorldRX of France.

Davy Jeanney is a double winner already this season, having taken wins in Germany and Canada and Hansen added to the teams success by taking back to back wins in Norway and France, confirming the improved pace of the team’s Peugeot 208 WRXs over the summer. By taking his second win this season, Hansen now sits second in the Drivers’ Championship and poised to challenge Championship leader Petter Solberg in the last four rounds of the series.

Hansen dominated the opening day by being fastest in both heats before saving his tyres during heats three and four to qualify for the Semi-Finals. This strategy paid off for the young Swede as he held off Mattias Ekstrom in a hectic Semi-Final one for victory which rewarded him with pole position for the Final, where Hansen dominated from lights to flag to take his second victory.

Team-mate Davy Jeanney was looking for better luck on home turf and the support from the French crowd was immense over the weekend. Despite being quick in the heat stages with some epic on track action, Jeanney qualified for the Semis in 11th place. However contact with Andreas Bakkerud in Semi-Final two on lap four ruled the Frenchman out any further from the weekend, but his speed was once again unquestionable.

With his victory last weekend, Hansen now sits in second place in the Championship table, 39 points behind Solberg with four rounds left to try and overhaul the 2014 WorldRX Champion. But he was ecstatic with his second win.

“I can’t find words to describe how good it feels to have won in France with Peugeot! The French love French cars and I was thrilled with the support they gave me. Everyone at Team Peugeot Hansen worked hard for this race. I think the fans realised that and they believed in our chances. I did my best to pay them back in the best way possible. That said, it was a tough couple of days out on the track.

“Tyres play a very important role at Lohéac and we tried to manage them as best we could. In the fourth heat, my 208 WRX ran like a dream. In the final, I did four or five laps absolutely flat out and reaching speeds like that at a circuit like Lohéac is an incredible sensation. I took the time to savour the moment during the last lap!”

Team-mate Davy Jeanney reflected on the positives from a difficult weekend at his home event.

“The weekend didn’t go as I had hoped. It started with a small mistake in the first heat which cost me dearly because I was then in the bad batch for the other heats. I think that’s why I punctured in Heat 4. I still managed to qualify for the semi-final and I got away to a good start, but on the outside.

“Next time round, though, I was punted off by another car and, at that sort of speed, it’s impossible to regain control of the car. I hit a guard-rail head-on and there was no way I could have continued after that. The team now faces a big job to get the car ready in time for Barcelona.”

Team Principal Kenneth Hansen was overjoyed with the teams and drivers performance over a successful weekend.

“It was an absolutely fantastic weekend for the whole team. We prepared very thoroughly for Lohéac where we were expecting strong home support, but we were hardly expecting the enormous backing we received. Davy’s got an incredible fan club! Our strategy was well planned and we stuck to it, although Davy had a little trouble getting into the swing. Maybe the pressure affected him a bit. He still showed good pace but, unfortunately, his run ended abruptly at the semi-final stage.

“As for Timmy, he was quick out of the box, and feeling very confident, too. He coped well with the pressure in his semi-final and also in the final to notch up his second straight victory. It’s a dream come true to have won at Lohéac for Peugeot!”

Team Peugeot-Hansen will now prepare for the next round of WorldRX at the Barcelona Grand Prix circuit in two weeks time.

By Nigel Chiu
1 Mins read
Latvia was a better weekend for Liam Doran considering the misfortune he has had so far in the 2020 World RX season, but he still thinks there is a lot more to come from him and the car.
FIA World Rallycross

Timmy Hansen: "The team hasn't made a single mistake all weekend.”

By Pontus Lindroos
4 Mins read
A great weekend for KYB Team JC in Latvia as Mattias Ekström took the win in Sunday’s final with Robin Larsson joining the podium in third.