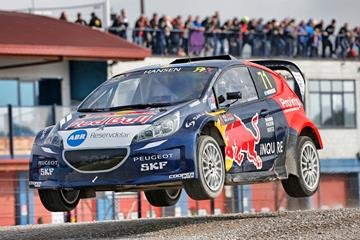 Kevin Hansen became the 2015 RX Lites Champion in Italy as the series had its final event of the year on the support bill of the penultimate round of the 2015 FIA World Rallycross Championship.

Coming into the final round of the season, Hansen held an eleven-point championship lead over rivals Kevin Eriksson and Thomas Bryntesson during a season which has seen victory at previous events for all three drivers and led to a very close season finale. Hansen kept his pace fast enough to maintain his position within the top four places during the four Heat stages in his Peugeot Red Bull Hansen Junior Team RX Lites car to qualify second for the Semi-Final stages.

Well aware of the knowledge that qualifying for the RX Lites Final would secure the title for him, Hansen’s job became easier when title rival Bryntesson broke his rear suspension in his Semi-Final race, leaving the young Swede to qualify for the Final and go on to finish in second place in the Final itself behind series rival Eriksson.

Hansen was ecstatic with taking his title victory in the final round: “It feels so amazing to wrap up this season with a podium in Italy. Coming into this weekend, I was not so nervous, but when you get closer and closer to the end, the feelings start to come up inside you.

“Before the semi-final I knew I had to get to the final to be champion, but when I saw Thomas Bryntesson slow on the track in the first semi-final, I knew I was champion already, so I could enjoy the two last races,” said the Peugeot 208 Lites driver. “I’m really happy with the second place. Before anything else I must say thanks to the whole team for all of their hard work, I couldn’t do it without them. The team spirit is amazing and I’m so happy to be champion together with them.”

The RX Lites Cup has featured hard fought competition at the front of the field throughout the season, making Hansen’s win all the sweeter. “There has been really hard racing all year; we’ve all been really close together all the time. As a team we’ve been stable all year, collecting good points all the time, and the car has been so quick and strong. I’m so so happy to be champion,” summarised Hansen.

As part of his Championship win, Hansen will appear in the final round of the 2015 FIA World Rallycross Championship in Argentina next month at the wheel of a WorldRX Supercar.

By Nigel Chiu
1 Mins read
The Belgian round of the 2020 World RX season will now not take place due to an increase in COVID-19 cases in the country.